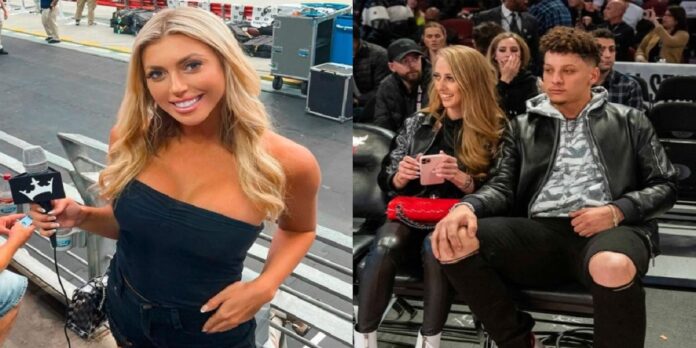 Patrick Mahomes and Brittany Matthews have dealt with a lot of outside criticism including some from an Instagram model who is a Steelers fan.

The Chiefs quarterback has turned in perhaps the greatest start to an NFL career by any quarterback. In his first full year as a started, Mahomes threw for 5,000 yards and 50 touchdown, only the second player ever to do that. That feat earned him the NFL’s MVP award.

In short, in his four years as a starter, Mahomes has been to the Super Bowl twice, won it once, made four straight Conference Championships, made the Pro Bowl four times, and was First-Team AP All Pro once. For just four years in the league as a true starter, that’s ridiculous. All that has turned into a 10-year, $503 million extension for the quarterback.

Numbers wise it’s insane how far ahead of every single QB Patrick Mahomes is at this age of his career. He’s still got 15 years left in him too…he’s gonna shatter every single QB statistic there is pic.twitter.com/Tu0sB6eS51

Patrick Mahomes and Brittany Matthews were called out by Instagram model

Back in 2020, the Kansas City Chiefs matched up against the Pittsburgh Steelers in an important AFC matchup. The result was incredibly one sided though as Mahomes and the Chiefs rolled to a 36-10 victory.

Pittsburgh Steelers fan and Instagram model Amanda Vance was called out after the game. Vance has a net worth of $3 million, and she has 530,000 followers on Instagram.

She also doubled down on her take after being called out for the message.

Brittany Matthews and Jackson Mahomes have drawn a lot of unwanted media attention for their sometimes unremarkable antics off-the-field, but regardless, Vance’s comments were petty coming off of such a big blowout loss, clearly jealous of the Chiefs’ success.