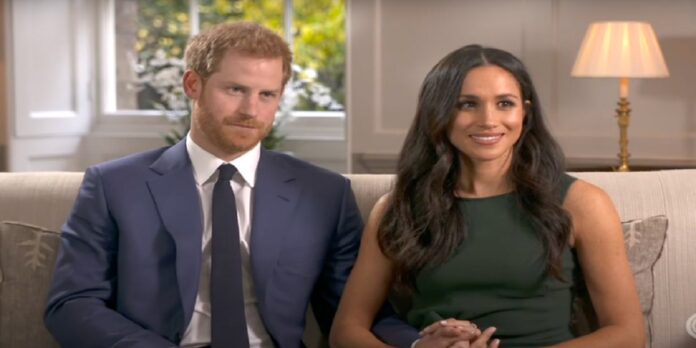 Unsurprisingly, a Christmastime royal reunion and possible reconciliation following the release of Meghan Markle and Prince Harry’s Netflix docuseries Harry & Meghan didn’t happen in Sandringham today. While King Charles III attended church with his family, including Kate Middleton, Prince William, and all three of their children for the first time, Meghan and Harry opted not to fly over to the U.K. and participate in the royal Christmas ritual with their two children. They weren’t photographed there, likely choosing instead to remain in the U.S. and their California home. The couple last was photographed at Sandringham service with the royals in 2018.

Meghan and Harry’s exact Christmas plans have been kept private for now, although the couple did release a Christmas card through their Archewell non-profit.

“Wishing you a joyful holiday season,” they wrote alongside a photo of them at the Ripple of Hope awards in New York this December. “From our family to yours, on behalf of our teams at The Archewell Foundation, Archewell Audio, and Archewell Productions, we wish you health, peace, and a very happy new year!”

Their absence isn’t all that surprising though given the release of their docuseries, where they addressed head-on why their relationship with the royals, particularly William, is strained, and how the royal family has reacted to it.

The royal family has not publicly commented on Meghan and Harry’s docuseries, but sources (and royal aides) speaking to outlets have made it clear the family isn’t exactly happy about the claims Meghan and Harry made in it, including that the royal family was threatened by their popularity, did not do enough to protect them and even briefed against them to the media.

A source close to the royals told Entertainment Tonight on December 19, “there is no trust left,” with Meghan and Harry, and the family is also worried about what Harry’s memoir Spare, out in January, will reveal.

Of Meghan and Harry’s own side, a source close to the couple told The Sunday Times they want an apology, citing the royal family’s handling of its recent racism scandal with Ngozi Fulani in contrast to its handling of them.

The royals arranged for a reconciliation meeting between Fulani and former lady-in-waiting Susan Hussey, who made inappropriate remarks about Fulani at an event. Their press offices, including William and Kate’s despite the couple not being at the event where the incident occurred, also commented on what happened rather than ignoring it the way they have with Meghan and Harry’s allegations of mistreatment.

“Nothing like that [response] was ever done when Harry and Meghan raised various concerns—no meeting, formal apology or taking responsibility or accountability. That is hard to swallow—100 percent yes they’d like to have a meeting,” the source close to Meghan and Harry said of their hope with the family now, post-docuseries. The couple, the outlet reported, are “keen for a meeting and reconciliation with the royal family before the coronation [of King Charles III] next May, which they are expected to attend.”

The Sunday Times also reported that the royal family doesn’t feel similarly right now and has no plans to arrange a meeting with the Sussexes. As one courtier told the outlet of the royals’ lack of official response to the documentary, “We are deliberately keen to send a message by being voiceless. Our duty is to get on with the job. It isn’t to respond.”

Still, there is potential for things to improve eventually. Meghan herself told The Cut at the end of August of the state of her and Harry’s relationship with the royals, “I think forgiveness is really important. It takes a lot more energy to not forgive. But it takes a lot of effort to forgive. I’ve really made an active effort, especially knowing that I can say anything.” She then went quiet before adding, “I have a lot to say until I don’t. Do you like that? Sometimes, as they say, the silent part is still part of the song.”

Harry, meanwhile, acknowledged in Harry & Meghan that he has come to accept the royals may never say sorry.

Harry said in the documentary of attending Prince Philip’s funeral with his family after he and Meghan stepped back from their roles and moved to California, “It was hard [being back there], especially spending time having chats with my brother and my father who were very much focused on the same misinterpretation of the whole situation [of the Sussexes leaving]. None of us really wanted to have to talk about it at my grandfather’s funeral, but we did. And I’ve had to make peace with the fact that we’re probably never going to get a genuine accountability or a genuine apology. My wife and I, we’re moving on. We’re focused on what’s coming next.”

“I miss the weird family gatherings when we’re all sort of brought together under one roof for certain times of the year,” Harry added later of what he misses, likely alluding to royal Christmas at Sandringham. “Being part of the institution meant that I was in the U.K. So I miss the U.K. I miss my friends. I’ve lost a few friends in this process as well.”

“There’s times when I’ve been angry, but I can’t be that angry because I genuinely feel that I, and we, are exactly where we’re supposed to be,” he said in the final minutes of the series. “We’ve made it to the other side.”