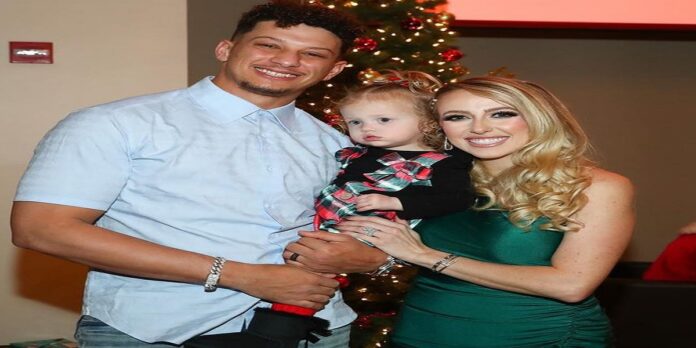 The love story between Patrick and Brittany started off with a Valentine’s Day joke. Kansas City Chiefs quarterback Patrick Mahomes is proof that, contrary to popular belief, it is possible to leave the friend zone. His wife, Brittany, told the story of how she didn’t like him at first because they were best friends.

The love story between Patrick and Brittany started off with a Valentine’s Day joke, as told by the mother of two during an interview with Vitatity.

“But I never liked him,” Brittany said. “We were just best friends. So then, I think his sophomore year, my junior year. yeah, he brought this little Valentine’s gift for me at lunch one day. It was like a heart like card that said Happy Valentine’s Day and like a rose or something and he just like brought it to me as a funny joke, but like I thought it was the cutest thing in the world.

“Everyone in the cafeteria started chanting like kiss her kiss her to him and I was like, Okay, this is embarrassing. From then on. I think that’s where I just kind of started getting a crush on him. And then, boom, we just fell in love.”

The pair of high school sweethearts have been together ever since. Brittany has been alongside Patrick through the NFL Draft and Super Bowl victory.

Brittany Mahomes does not deserve the hate
Despite countless trolls constantly trying to tear down Brittany, she and Patrick have never given any hater the time of day.

Being the wife of the league’s greatest quarterback is not easy, so Brittany deserves a lot of credit for keeping her composure amid negativity.

Mahomes, 27, is currently having an MVP-caliber season, which will likely still be the case when his children are old enough to attend a Chiefs game live.