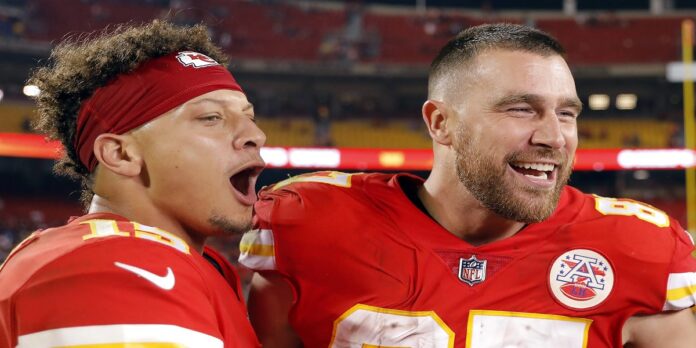 With the next game scheduled for Christmas Eve, the Kansas City Chiefs exchanged gifts a bit early and quarterback Patrick Mahomes II spilled the details on some of this season’s presents inside the locker room.

During his recurring spot with “The Drive,” on Audacy’s 610 Sports Radio (Kansas City), Mahomes chatted about the holiday season with host Carrington Harrison. Not shocking, but the superstar appeared most excited about the gift he Patrick Mahomes Shares Reaction on Travis Kelce Xmas Gift
Apparently, Kelce went and bought his offensive teammates BearBricks — which, in case you didn’t know, are expensive collectible toys designed and produced by the Japanese company MediCom Toy Incorporated. Chiefs Digest reporter Matt Derrick first relayed this news on December 16, and Mahomes was apparently very pumped to receive the figurine for Christmas.received from best friend and teammate Travis Kelce.

“I [have] been wanting to get one for a while, the BearBrick things,” Mahomes told Harrison. “Brittany [Mahomes] wouldn’t let me get it, so now she has no excuse, I get to have it. I’m going to throw it in my game room or in the basement in my mancave area, but she was not too happy about it.”

As for Mahomes’ show of appreciation, the team leader revealed that he got his offensive linemen some “custom-fitted golf clubs” and “designer luggage to take on the road.” He also noted that he tried to get everyone a little something, and gave a lot of his teammates a pair of his new red and white Mahomes One sneakers.

Mahomes joked that “hopefully, [the O-line] can pick up their [golf] game” and play a couple of rounds with him next year. The competitive star also voiced that no one on the roster is currently that close to beating him in golf — said he’s played with Kelce 100 times and never lost — but added that backup quarterbacks Shane Buechele and Chad Henne are probably the two that are most likely to give him a run for his money.

Finally, Harrison asked about the holiday photoshoot that we saw pictures of with Sterling Mahomes and Santa Claus. Patrick Mahomes called the entire experience with his daughter “awesome.”

“We got to do it at the Chiefs’ Christmas party, which is always a great event for us,” the Chiefs QB detailed. “She wasn’t too scared of Santa, but she was terrified of Wolfie, the mascot, so we have to make sure we keep him away from her until she gets older. He has a lot of energy, too, and she’s a very calm baby. I don’t know if they mix right now.”

Christmas presents are arriving in the Chiefs locker room. Travis Kelce bought everyone on the offense a Bearbrick, and a good time is being had by all.


JuJu Smith-Schuster Pays It Forward
Speaking of Christmas gifts, KC wide receiver JuJu Smith-Schuster made headlines this holiday season for his efforts giving back to the community. The 2022 newcomer and his foundation “paid off almost $10,000 in layaways at a Kansas City-area Burlington store,” according to KMBC 9 News.

This thoughtful gesture impacted over 50 Kansas City families, and Smith-Schuster was just happy to help.

“I love it so much because being a part of the community is what it’s all about,” the wide receiver stated to KMBC reporters. “These people are die-hard fans. They support us every Sunday, every game that we play in.”

Smith-Schuster also voiced that there were times growing up when his family couldn’t afford to exchange presents, so “it’s just nice that I have an opportunity to be a role model to these kids and to give back to the community.”