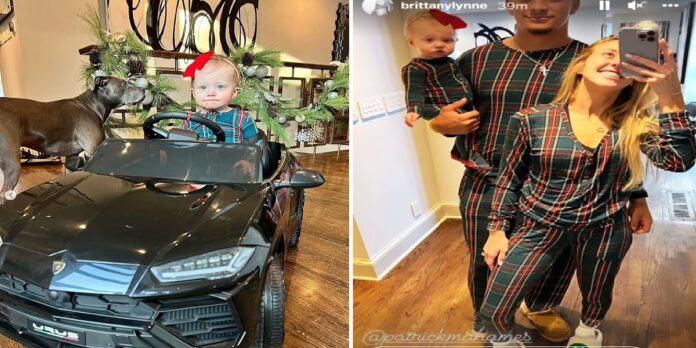 The NFL star and the fitness trainer – both 26 – lavished gifts upon their 10-month-old princess, including a little black Lamborghini.

‘It was awesome, and you can control it through a little remote control too,’ Patrick told The Drive on 610 Sports Radio on Monday.

‘I think it’s a bad sign for me that she’s already getting a black Lamborghini. Brittany’s already putting it in her head.’

Mahomes added: ‘She was playing with literally everything. It was fun to see her do that.’

Patrick told The Drive on Monday: ‘It was awesome…[but] I think it’s a bad sign for me that she’s already getting a black Lamborghini. Brittany’s already putting it in her head’

Mahomes said Matthews is planning a low-key New Year’s Eve celebration at home and he’ll ‘try to make it to 12-something.’

‘These days that’s kind of late for me being the dad that I am now, but will try to make it until the ball drops in New York,’ the 6ft3in athlete said.

‘I wish we were able to do something New Year’s Eve-wise, but with COVID and everything like that you kind of have to separate yourself.’

Patrick’s team kicks off 2022 with a game against the Cincinnati Bengals next Sunday at Paul Brown Stadium in Ohio.

NBA & NFL admin - December 29, 2022 13737
Patrick Mahomes and the Kansas City Chiefs capped off Christmas with the perfect cherry on the cake. The 24-10 win against the Seattle Seahawks...