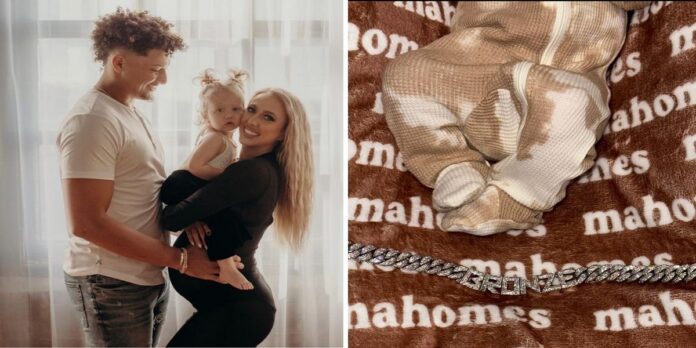 The Mahomeses are basking in baby bliss, and they’re slowly but surely introducing their newborn son, Bronze, to the world. During an appearance on Audacy’s 610 Sports Radio, daddy Patrick Mahomes opened up about the baby’s unique nickname, his birth story, and how big sis Sterling is handling her new sibling duties.

“My brother, Jackson, [came up with Bronze’s nickname],” Patrick shared on the radio show. “We were going with Trey at first because the third obviously and everything like that,” he explained, as Bronze’s actual name is Patrick Lavon Mahomes, making him the third Patrick Mahomes in the family.

From Ruby to Aurelia, these are the baby names are perfect for your little one. https://t.co/uxhaw0LScZ

The NFL quarterback continued, “I started meeting more and more people with the nickname Trey, and Jackson came up to me and was like, ‘What about Bronze?’ I kind of have the metal thing going with Sterling and all that, and I thought it was a great idea, and I think it’s something I’m glad we came up with. I haven’t seen anybody else do that… I like it.”

And as for baby Bronze’s birth, the kid had great timing. Born on November 28, the Monday following Thanksgiving, Patrick said, “It worked out well because you get the family in for Thanksgiving weekend and having a game. So you go to Thanksgiving and get to watch a lot of football, and you play, you win a football game, and then your family is in town whenever you have your baby boy, so it’s been a wild ride the last few days, but we’re back at home and ready for the football game this weekend.”

The proud dad gave an update on his 1-year-old daughter, Sterling, as well. “She’s figuring it out,” he explained of her new role as a big sister. “She wants to hold him, and take care of him, and everything like that. I think the only thing that she hasn’t figured out yet is why mom has someone else that’s not her she’s holding all the time, so she’s figuring that part out, but other than that she loves her little brother. She wants to play all day, and we have to tell her to be gentle. And we have to tell her to don’t throw him like a toy baby,” he half-joked.

And of course, the doting dad also made his appreciation for his wife, Brittany, clear. “Luckily for me, I have a great wife, who does a lot of great things and keeps stuff off my plate,” Patrick said. “She does a great job so when I’m in the building I’m able to be a football player, and at home, I can be dad.”

The new mama of two shared her own sneak peek of Sterling and baby Bronze on her Instagram Story. In a photo with Bronze’s face cropped out, Sterling is sitting on a couch with her baby brother draped across her lap. The big sister has her tiny hand resting on her little brother, who’s dressed in some seriously adorable black constellation PJs (which appear to be ZippyJams Galaxy Love, to our discerning shopper’s eye). Mama Britt captioned the post “Truly been the best big sissy,” and our hearts are melting into baby fever soup.

NBA & NFL admin - January 10, 2023 13905
In just four years, Patrick Mahomes has rapidly elevated into one of the top quarterbacks in the league. To compete at his level is...

NBA & NFL admin - December 29, 2022 13746
Patrick Mahomes and the Kansas City Chiefs capped off Christmas with the perfect cherry on the cake. The 24-10 win against the Seattle Seahawks...