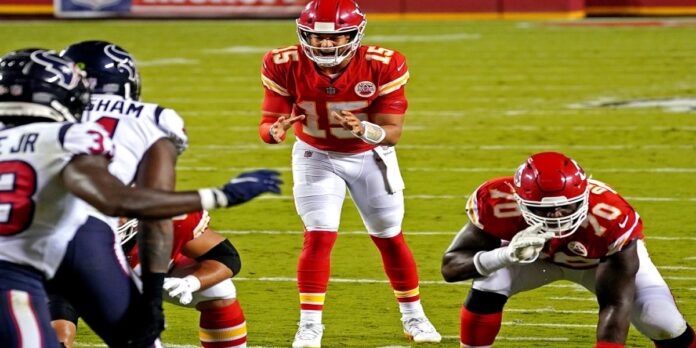 Count Week 15 as the third straight week the Houston Texans defense will be going against a playoff-winning quarterback.

The Texans will see Patrick Mahomes for the fourth time in his career, including playoffs, when the Kansas City Chiefs visit NRG Stadium Sunday at 12:00 p.m. Central Time.

Texans defensive line coach Jacques Cesaire is plenty familiar with Mahomes after having spent 2020-21 as the Buffalo Bills’ assistant defensive line coach. The Chiefs were responsible for knocking the Bills out of the postseason in both of Cesaire’s years in Buffalo.

“He’s a dynamic player,” Cesaire told reporters Dec. 15. “One of the best quarterbacks in the NFL, he’s won a Super Bowl. He’s very, very experienced. He’s very slippery in and out of the pocket, and he makes all the great throws. He has a great arm. It’s going to be a tremendous challenge for the guys. I know that we’re always us for any challenge.”

Mahomes leads the NFL with 33 touchdowns. The Chiefs are 10-3 and currently second in the AFC due to the Bills having a head-to-head tiebreaker over the Chiefs. Kansas City won’t be overlooking Houston as they need to continue stacking wins and hope for the Bills to falter.

The Denver Broncos made the Chiefs sweat in Week 14 as Kansas City pulled off a 34-28 victory despite leading 27-0 with 4:32 to go in the second quarter. Mahomes threw three interceptions and took a couple sacks as Denver clawed their way back into the game.

“We always look at what everybody does out there,” Cesaire said. “You have respect for any defensive line that’s applying pressure on any quarterback in the league. We look at everybody, not just one specific group. He’s going to pose some particular challenges, and we’ve looked at that, and we’ve come up with our plan of how we’re going to try and stop him and slow him down.”

Mahomes has thrown 11 touchdowns to one interception and been sacked twice in his three previous contests against Houston. Sunday will be the first time he will go against the Texans in their Tampa 2 scheme; previous bouts were against Romeo Crennel’s 3-4 defense.

“It’s going to be a good slugfest,” said Cesaire.

NBA & NFL admin - December 29, 2022 13738
Patrick Mahomes and the Kansas City Chiefs capped off Christmas with the perfect cherry on the cake. The 24-10 win against the Seattle Seahawks...