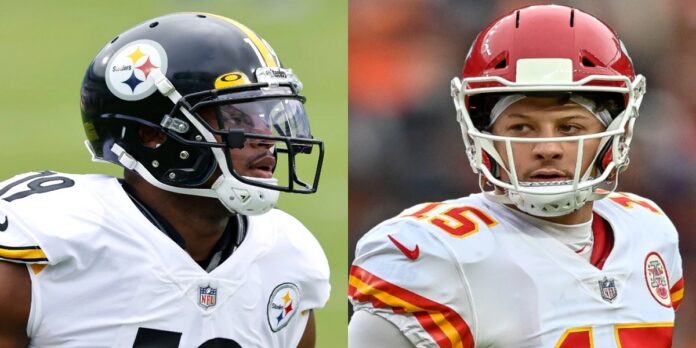 The Kansas City Chiefs are on the verge of clinching another AFC West following Sunday’s victory over the Denver Broncos. Patrick Mahomes showed the world his uncanny ability to dazzle a crowd with his unique ways of making big plays to win games.

The latest highlight reel from Mahomes featured a co-star in receiver JuJu Smith-Schuster, who secured the game-sealing touchdown on Sunday. The former Pro Bowl receiver has quickly formed a bond with Mahomes on the field, adjusting to his scrambling and finding ways to get open when a play breaks down.

Smith-Schuster spoke with reporters after the game about taking incredible pride in being able to improvise with the former league MVP.

“Oh, yeah. Scramble, always improvising,” Said Smith-Schuster, “I think on at least three out of my nine catches today. I pretty much ran a route that I wasn’t supposed to run, and I just did it anyways.”

Another notable play from Mahomes took place in the first half on Sunday. Mahomes found a way to scramble and toss an unorthodox no-look pass underhanded to Jerick McKinnon for a second-quarter touchdown. Mahomes’ pass to McKinnon went for 56 yards and made quite the impression on Smith-Schuster.

“That was crazy. It was crazy, that was a crazy one. I haven’t seen that,” said Smith-Schuster. “I mean, I’ve seen him make a lot of stuff in practice, but I’ve not seen him make that underhand throw (like that), and he did it. It was like no look like he had a stiff arm and then (he) threw and then, touchdown!”

Smith-Schuster has been impressive this season and continues to receive more targets each game in his return from a Week 10 concussion. More time in the offense heading into the postseason could unlock even more big plays for this newly-formed dynamic duo.

NBA & NFL admin - January 10, 2023 13905
In just four years, Patrick Mahomes has rapidly elevated into one of the top quarterbacks in the league. To compete at his level is...

NBA & NFL admin - December 29, 2022 13746
Patrick Mahomes and the Kansas City Chiefs capped off Christmas with the perfect cherry on the cake. The 24-10 win against the Seattle Seahawks...