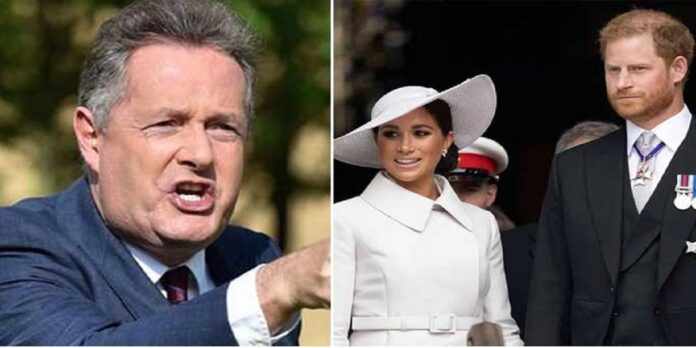 Piers Morgan criticises Meghan Markle for comments she made about her family, including her father

Slamming the Duke and Duchess of Sussex’s Netflix show ‘Harry & Meghan’, Morgan wrote: “This is worse than Keeping Up With The Kardashians. Something I didn’t think was humanly possible.”

In other tweets, Morgan called the couple “boring” and hit back against claims they made about racism. “Disgusting how they’re repeatedly trying to brand Britain a racist country,” he wrote. “Most tolerant place in Europe, as all the coverage of their engagement/wedding showed.”

Morgan criticised Meghan for comments she made about her family, including her father.

In another tweet Morgan wrote: “Markle now trashing her own father, who is still recovering from a massive stroke. Ms Compassion hasn’t even called him.”

The former Good Morning Britain presenter also criticised footage in the series that compared Meghan to the late Princess Diana.

During a Monday appearance on Fox & Friends, Morgan said, “Her [Markle’s] attempt to put herself on the same pedestal as the most famous and pursued royal in history, I think is frankly disgraceful.”

In addition to his tweets about the Netflix series, Morgan wrote a review of the show for The Sun. In that article, he theorized that Harry “now seems so permanently unhappy” because he’s “manipulated by a seasoned family-wrecker into abandoning the people and country he once loved.”

He added: “The sad truth is that Meghan and Harry are now nothing more than whiny delusional self-serving money-grabbing royal Kardashians – only with less class, loyalty or brains.”