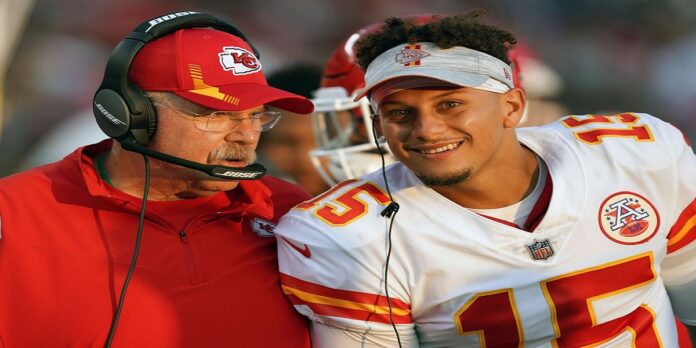 The QB and HC both spoke with the media Wednesday as the team sits on the brink of clinching its seventh straight NFL playoff appearance.

Despite coming off a hard loss to the Cincinnati Bengals, the Kansas City Chiefs are turning their attention to Week 14.

Quarterback Patrick Mahomes and head coach Andy Reid both spoke with the media Wednesday as the team sits on the brink of clinching a playoff berth.

The QB and HC are both focused on their next opponent, the (3-9) Denver Broncos.

With a win against their Russell Wilson-led AFC West rival and Chargers loss to the Dolphins, Kansas can punch its ticket to the playoffs this weekend.

The Wilson era has been off to a disastrous start in Denver. Still, with an above-average defense, the Chiefs should be careful not to overlook the Colorado squad.

Mahomes is also speaking the day after being nominated for the prestigious Walter Payton Man of the Year Award.

Reid said Mahomes nomination was a reflection of his character.

The Chiefs now sit behind the Buffalo Bills in the race for the AFC’s lone playoff bye week. They will need the New York team to drop at least one more game to have a shot at a week off during the playoffs.

While certainly not an easy task, a recent development for the Bills will give the team a roadblock to the one seed.

Coach Reid told reporters that every currently active Chief would practice in some form Wednesday, including wide receiver Kadarius Toney.

The head coach also spoke positively of the progress of another receiver Mecole Hardman. The young veteran has been on injured reserve for several weeks and will be eligible of coming back in Week 15.

Reid stopped short of confirming his return but indicated that Hardman was beginning to take practice reps.

Mahomes has never lost to the Broncos. When asked if he takes pride in his AFC West dominance, the QB said it was a part of the season goals and proof of the preparation the team puts in to get to the playoffs each year.

NBA & NFL admin - December 29, 2022 13736
Patrick Mahomes and the Kansas City Chiefs capped off Christmas with the perfect cherry on the cake. The 24-10 win against the Seattle Seahawks...