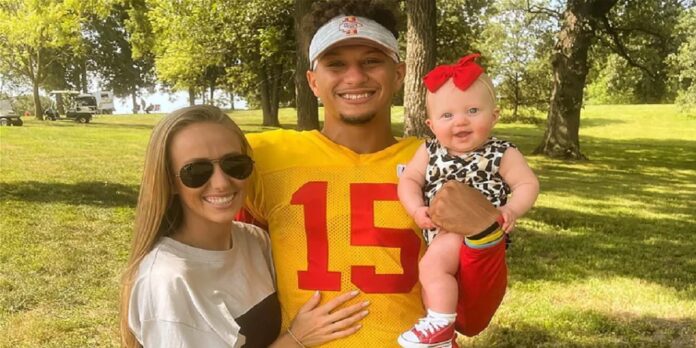 Patrick Mahomes and his wife Brittany welcomed their second child this week. The couple announced the arrival of their newborn on social media. Their older daughter, Sterling, has been infamous for her appearances at father Patrick Mahomes’ games. Sterling has been upgraded to older sister duties with the arrival of Patrick Lavon III.

Brittany, as usual, hasn’t hold herself back from showcasing her life on social media. She has posted her daughter along with her baby brother multiple times already and it’s just been a week.

Sterling Mahomes is a natural

In her latest show of love for her children, Brittany posted an Instagram story with Sterling and Bronze in it. This came after the first story in which she posted Sterling caressing her baby brother. While Bronze’s face wasn’t visible in that story, Sterling’s love for her brother was very visible as she looked to be taking the big sister role seriously. As a doting older sister, she held her baby brother in her lap.

In this story, Sterling was in her happiest element. While the newborn was still not visible, Sterling was seated on the floor showering love to her baby brother. She looked over at him in awe as she seemed love-struck with her little brother. With her eyes popping out and mouth left open, Sterling looked her most adorable self as usual. Obviously, the Instagram story has expired now.

Her mother captioned the image, “She is obsessed & loving her new role”. This was a revelation of how the mother recognizes Sterling taking up her new role with absolute joy. While some kids don’t like the idea of their parents sharing their love with another child, it doesn’t seem like that is going to be a problem for Sterling or her parents. The one-year-old has quickly adjusted and taken to her role of big sister.
Patrick Mahomes has something great going on for him

Sterling was born to Patrick Mahomes and Brittany Mahomes a little less than two years ago, as she completed 21 months recently. The athletic couple will be glad about the arrival of their newborn son. With not a very drastic age gap between the two kids, growing up in this environment is just going to be a great time for them. A brother-sister combination will also work out well as little Bronze will always have his older sister protecting him wherever life may take him. Not to forget, their father also seems to make the perfect father figure for the kids.

The NFL world is also surely going to see the blossoming of this cute sibling relationship for years to come as Brittany isn’t going to shy away from posting her kids on the regular. It is just a short time until the newborn makes his debut at a Chiefs game.