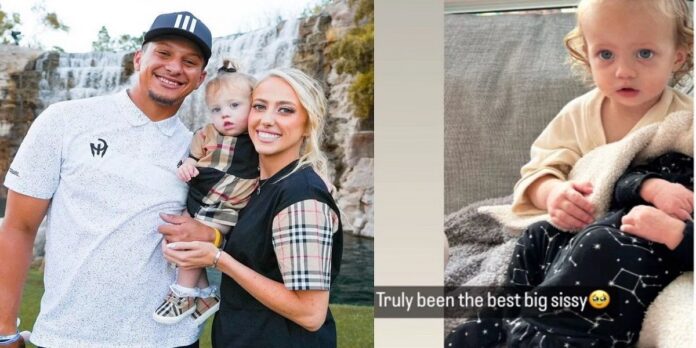 Kansas City Chiefs quarterback Patrick Mahomes and his wife Brittany announced the birth of their second child, Patrick “Bronze” Mahomes III, earlier this week. It appears that their daughter, Sterling, who is 20 months old, is already taking on the role of big sister.

Brittany posted to her Instagram story earlier this week that Sterling is the ‘best big sissy’ along with a photo of their daughter holding their newborn son. As they did with their firstborn, the Mahomes decided not to reveal their baby’s face right away after his birth.

The quarterback announced the birth of their baby via their social media accounts. They posted a photo of their baby boy laying on a personalized blanket that says ‘Mahomes’ and a necklace that reads ‘Bronze’ laying on the blanket below him.

The birth of their second child came less than 24 hours after the quarterback and Kansas City Chiefs defeated the Los Angeles Rams 26-10.

Patrick Mahomes spoke to reporters after a Chiefs practice just days after he and his wife announced the birth of their son. The Kansas City Chiefs quarterback announced that their son shared the same name as his father but with a unique nickname, Bronze.

When asked how the couple decided on the name Bronze, he credited his younger brother Jackson for the idea. He said that when they were thinking of a unique name and something different, he suggested Bronze since it fitted so well with their daughter’s name, Sterling.

“My brother Jackson, whenever we were trying to find something that was a little unique and different, he said, ‘What about Bronze? It fits perfectly with Sterling. It works out well. He can have his own thing now where he’s not Patrick, he’s Bronze, even though he’s Patrick.’ And, Sterling and Bronze can have that connection moving forward.”

He went on to say that they loved the name because he can have his own identity even though he shares the same name as his father and grandfather. It also gives both of their children a similar theme to their names.

The Chiefs quarterback also talked about the importance to him to continue the tradition that his father started with their names. His father, who goes by Pat, was a Major League Baseball player, and Patrick, being a Super Bowl winner, gave Bronze his own identity.