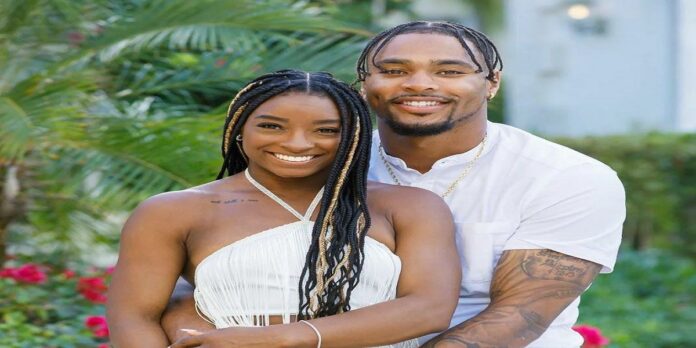 “I Gotta Dust Her By 10 Seconds”: Simone Biles Faced Defeat In Front Of Fiance Jonathan Owens When It Came To Coordination Of Mind and Body,The world’s greatest gymnast, Simone Biles, is enjoying her life’s most special time with her fiance and NFL player Jonathan Owens. Their fans have been eager to know more about them since the couple made their relationship public in 2020. The couple has appeared in many interviews together giving insights about their relationship. In one such session, Simone and Jonathan revealed their competitiveness with each other.

Four-time Olympic gold medallist Simone Biles is the most decorated gymnast ever. The winner of 25 World Championships is equally famous for her love life with Jonathan Owens. The 27-year-old NFL player has been a respected player in Houston Texans.

Simone Biles and Jonathan Owens compete in a football face-off

Undoubtedly, Simone and Jonathan have aced their respective sports. But as a couple too, they are very competitive with each other. On many occasions, they were spotted playing different forms of sports together. Recently, in an interesting Fiance Combine episode of Daring With Simone Biles on Snapchat, the couple engaged in a football face-off. Simone stated that gymnastics was tougher than football. Obviously, this made Jonathan frown upon her statement.

The couple was tasked with performing ladder drills. They had to place their feet on each ladder in a dribbling motion. Initially, Simone did it perfectly but messed up the ladder while returning. Although she completed the challenge in 8 minutes and 52 seconds, tripping got her a penalty of five more seconds. After her task, Simone explained in the video;

“My coordination got off because my feet were moving faster than my brain.” Then, it was Jonathan’s turn. Before, the challenge he stated; “I Gotta Dust Her By 10 Seconds”

Jonathan completed the task in just 8 minutes. However, since he touched the ladder at one moment, his total duration added up to 9 minutes and 07 seconds. After the challenge, Simone stated that although she was a little bummed out for losing, as an NFL player, Jonathan was destined to win. Owens performs the drills frequently during his camp practices.
When is Biles marrying Jonathan Owens?

After meeting during the pandemic, Simone and Jonathan soon made their relationship public. The couple dated for two years and got engaged in February 2022. They posted a series of pictures on Instagram with an adorable caption that read;

The couple is likely to get married in 2023. However, Simone and Jonathan have not officially announced their wedding date yet. Fans are eagerly waiting to see the cute couple unite forever.