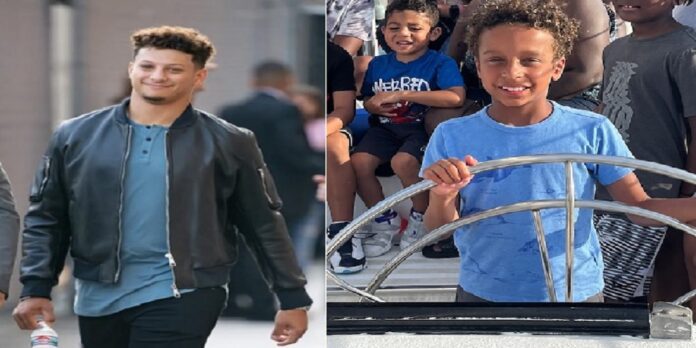 Kansas city chiefs quarterback, Patrick Mahomes’ influence does not stop on the field but also reaches out to his numerous fans all over the world. Patrick Mahomes’ impressive career continues to be a source of inspiration to the younger generation, including a particular 8-year old superfan.

Delano, 8, got to see Patrick Mahomes in person ahead of the Chiefs’ overtime triumph on Sunday Night Football. Delano also shown that interviewing abilities run in the family by asking Mahomes a question at the end of Craig’s interview with the chiefs’ superstar. Mahomes was accompanied by his close friend and colleague, Travis Kelce.

Delano Melvin is broadcast journalist and anchor at NBC News and MSNBC, Craig Melvin’s son. Delano Melvin asked Mahomes, “What do you look for in a friend?”. In his reply, Mahomes said “Oh, that’s a great question, I think what I look for in a friend is loyalty, someone’s that’s going to be with me through thick and thin, someone that cares not only about me, but my family as well. And someone that has my best interest. And I think that’s what I got in this big guy right here.”

Travis Kelce also agreed with Mahomes’ answer to the question by say “”I can’t say it any better than that, right there, That’s how you do it, baby”. Craig also chatted with the Mahomes and Kelce about how their off-the-field relationship has contributed to a Super Bowl victory and 40-plus throwing touchdowns.

“The friendship started just because I feel like we’re very similar, where we want to win,” Mahomes answered. “But we like to enjoy life, too. We’ve kind of built this friendship of we’re going to go out there and compete, and then we’re going to enjoy it while we do.”

“You just want to play for the guy next to you when you know him on more than just a business level,” Kelce added.

NEWS admin - November 8, 2022 13234
WTA Finals Preview: Aryna Sabalenka shocked Iga Swiatek. Can she close Fort Worth with a win over Caroline Garcia? Either Sabalenka or Garcia will earn...

NEWS admin - November 7, 2022 6279
Last time we checked Meghan was saying a buncha nice things about the Queen, but okay Charles. Meghan Markle and Prince Harry kinda have a...