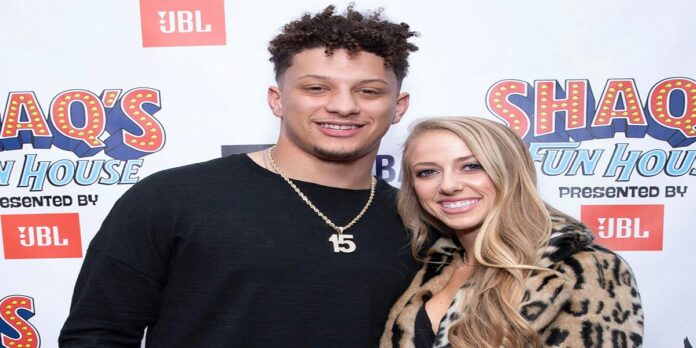 Brittany Mahomes is showing off her baby bump in style.

The expecting mother, 27, and wife of Kansas City Chiefs superstar QB Patrick Mahomes, shared a new photo of her recent maternity photoshoot on her Instagram Story.

In the sexy snap, Mahomes poses against a white curtained wall wearing a white bra and a sheer floor-length cape with pearls. Her growing baby bump is on full display. She is partially silhouetted underneath the sheer cape.

She wrote, “It’s another sneaky peaky 🥰” A few weeks ago, the businesswoman shared additional behind-the-scenes photos of the maternity shoot, including a close-up of her hair and makeup, which incorporated pearl dots around her brows and eyes.

She also snapped a picture of the area where the shoot would take place, which had white and beige curtains on display and a fog machine to make it look atmospheric.

“I can’t wait for you to see the magic we made today,” Brittany’s photographer wrote about the shoot.

Brittany and Patrick, 27, who are parents to 20-month-year old Sterling Skye, announced in May that another baby was on the way.

The pair posted photos on Instagram with Sterling Skye holding a board that read “Big sister duties coming soon,” and an additional photo holding an ultrasound picture. Patrick captioned the photo, “Round 2! 🤍”

The couple announced they would be having a boy one month later in a cute gender reveal photoshoot that they shared with PEOPLE. Brittany and Patrick sported sweatshirts that read “Baby Mahomes Boy or Girl” with “Boy” circled behind a poster splattered with blue paint.

The long-time couple – who have been together since high school and got engaged in September 2020 – finally tied the knot in March in an exclusive wedding ceremony in Maui, Hawaii.

The newlyweds shared a photo on social media of them kissing at the end of the aisle with the caption “Mr. & Mrs. Mahomes 🤍”

NBA & NFL admin - November 8, 2022 14386
he Kansas City Chiefs with a gritty 20-17 comeback victory in overtime against the Tennessee Titans in Week 9. Patrick Mahomes showed he will...