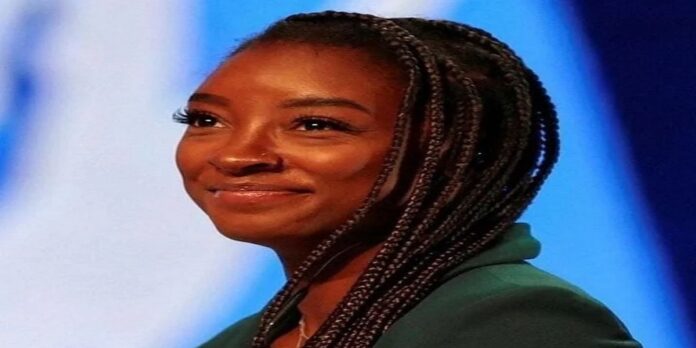 Simone Biles was just six years old when she started her gymnastics journey. The young girl from Ohio, under the guidance of coach Aimee Boorman, began to learn the sport’s nuances. Within a short time, she climbed up the success ladder. She did not just mark her presence on the vault but also went on to win 25-World Championship and seven Olympic medals, a feat that only a few could achieve.

With time, her popularity grew, and so did her fan following. While a few became her ardent fans, some became obsessed with her passion. Irrespective of age, Simone’s zest to win was enough to bind her fans together. Earlier this morning, TOGETHXR shared a video of a young Simone fan. The young toddler even caught the gymnast GOAT laughing.

The young toddler dressed up in Leotards was caught diligently performing some key gymnastic moves. Dressed in the typical Simone fashion, the young enthusiast attempts to make a perfect land, but in the process, she does something unexpected. What followed next took everyone by surprise, and even Simone could not stop herself from laughing.

As the young girl attempted to perfect her moves, she ‘farts.’ Realizing what she has done, she inquires her mother, “Mommy, does Simone Biles fart?” Undeniably that was “simultaneously the cutest and funniest thing.” As soon as the video was shared, fans’ reactions poured in.

While one user lent in some valuable advice and wrote, “Everyone farts.” The other commented, “This baby was ready to tear up her intestine if her momma told her, Simone, don’t fart.” Her innocence and her passion for the sport won everyone’s hearts. She is indeed, as a user mentions, “so adorable.” As more comments started to fill in, everyone was waiting for Simone’s reply to “this sweet baby’s question!”

Did Simone answer the important question?

Though Simone refrained from answering whether or not she farts? She did, however, not stop herself from sharing her reactions. As the video was shared, Simone could not help but laugh. Expressing herself best with the emojis, she reacted, “🤣🤣🤣🤣🤣💕💕💕💕💕.”

Simone also shared the reel in her Instagram story with the caption, “Hahaha. How precious” Though the young girl initially had difficulty landing, she did not give up. Towards the video’s end, she was spotted making a perfect landing with her one leg—the details of which she happily announced to her mother. Even seeing the video, Simone must be proud of her young admirer.