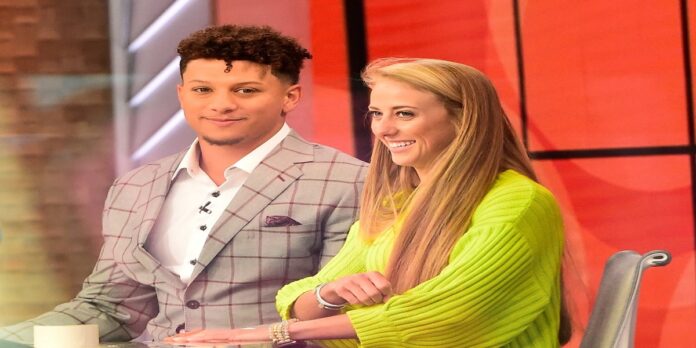 After leading his team to a Superbowl victory over the San Francisco 49ers in February, the athlete signed a massive 10-year contract extension reportedly worth more than $450 million in July. Then, in September, he and his longtime girlfriend Brittany Matthews got engaged. Now, the two have announced that they are expecting their first child together.

On Sept. 29, Mahomes and his fiancée shared the news via social media that they are having a baby. They each posted a picture holding a sonogram on their accounts.

“Just taking a small detour to the wedding, ” Matthews wrote. While Mahomes shared a similar photo with a heart emoji.

Following the couple’s happy announcement, the Chiefs signal caller was on KCSP 610 Sports Radio for his weekly guest spot and talked about everything from his personal growth to becoming a first-time dad.

Mahomes stated he and Matthews are “super excited for sure” about the future.

When asked about his own growth and maturity on and off the football field this year the quarterback said: “It’s about growing up, having responsibility, and just really evolving as a family. I think that we’ve done that — me and Brittany and the people around me. I’m just excited for the future ahead of being able to keep building and keep being a better person for my family and this world.”
Does Mahomes want a boy or a girl?

Mahomes was then asked the question most people get when they’re going to be first-time parents. So does he have a preference of a boy or a girl?

“No,” he answered. “Hopefully I have a healthy baby and someone I’ll be able to love for the rest of my life.”
Which teammates he will and won’t let babysit

MORE:Prince William PUBLICLY “Made It Clear” to Camilla That “She’s Not Step-Grandma to His Children,” ON …

When Mahomes and Matthews need a sitter, the quarterback knows which of his teammates he would call and who he wouldn’t.

“I’d say [reserve quarterback] Matt Moore or someone like that who’s responsible,” Mahomes told ESPN. The NFL star also joked about who he would not ask to babysit his child saying, “I can’t let Trav [Travis Kelce] or anybody. You never know what would happen.”

The Chiefs are currently 3-0 this season. Next up is the New England Patriots in a game that was postponed after quarterback Cam Newton tested positive for the coronavirus (COVID-19). Newton will not play in the matchup but Mahomes did talk about how much he admires the Pats signal caller’s physicality.

“I wish I could do some of the things he does as far as how physical he is and the way he’s able to make plays happen,” Mahomes said. “He’s a great football player and he’s playing good football.”

Just taking a small detour to the wedding😬❤️ @PatrickMahomes pic.twitter.com/u3nRaeOusS