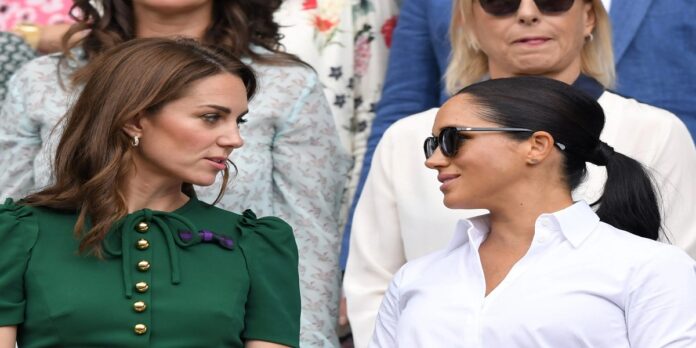 Meghan Markle Has officially “Put Out Request” for Kate Middleton to Be on Her Podcast,

Meghan Markle has hosted a ton of celebrity guests on her critically acclaimed podcast, Archetypes, but apparently there’s one person still on her wish-list: Kate Middleton. According to a new report in The Express, Duchess Meghan asked Duchess Kate if she’d like to appear on her podcast during her recent trip to the United Kingdom. (Reminder: the Sussexes and Waleses were staying just five minutes apart, and made several public appearances together.)

Here are the specifics: royal expert Neil Sean reportedly spoke to a source who said that while Meghan was staying at Frogmore Cottage, she “put out a request to the Princess of Wales” to appear on an upcoming episode of Archetypes. Apparently Meghan even offered that Kate have “the whole episode to herself.”

Sean added that “In Meghan’s eyes, this is because she based it along the idea of two Duchesses, as they then were at that point, and of course talking about how difficult it is to run a family, work-life [and] work balance.”

Apparently Meghan felt she and Kate were “progressing” in their relationship at the time of the offer, and while she and the Spotify team have “yet to hear back” there’s speculation that “maybe Catherine could even fit it in when she returns over to the United States later this month for Earthshot.”

I mean…the idea of Meghan and Kate doing a podcast episode together sounds amazing, but kinda too good to be true. Especially since the royals are said to be in a full blown spiral over Prince Harry’s memoir, Spare, which drops on January 10. Plus, The Sun recently reported that William “has barely spoken” to Harry since news of Spare broke, but hey! Just because William and Harry aren’t speaking, doesn’t mean Meghan and Kate can’t be on good terms, ya know?

NEWS admin - November 8, 2022 13224
WTA Finals Preview: Aryna Sabalenka shocked Iga Swiatek. Can she close Fort Worth with a win over Caroline Garcia? Either Sabalenka or Garcia will earn...