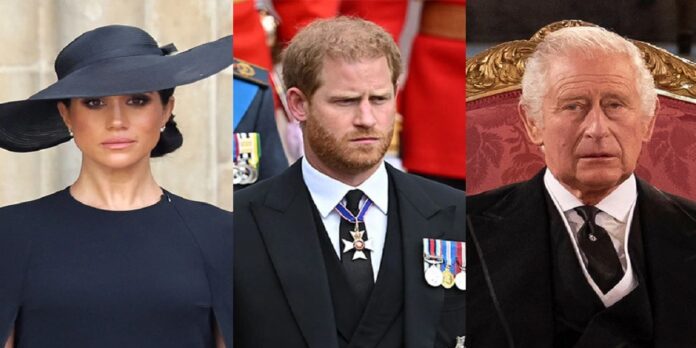 This shocking revelation has been made by an inside source close to OK! Magazine.

The source started off by admitting, “King Charles is aware of what Meghan said in a recent interview: she never had to sign anything that restricted her from talking. He knows Meghan is steadfast in her view and belief she, and not the family, is in control of what she says publicly.”

The insider also went on to say, “It’s the last thing The King needs to be thinking about, at this time, but make no mistake, it’s a very serious problem.”

Reportedly, King Charles is against Meghan Markle discussing “anything about the family’s interactions or events surrounding this very solemn occasion,” and has asked Prince Harry to “convince Meghan to end the podcast once and for all”.

more: Meghan Markle Says She Was Treated Like A “Bimbo” When She Worked On ‘Deal or No Deal’

NEWS admin - November 7, 2022 6249
Last time we checked Meghan was saying a buncha nice things about the Queen, but okay Charles. Meghan Markle and Prince Harry kinda have a...