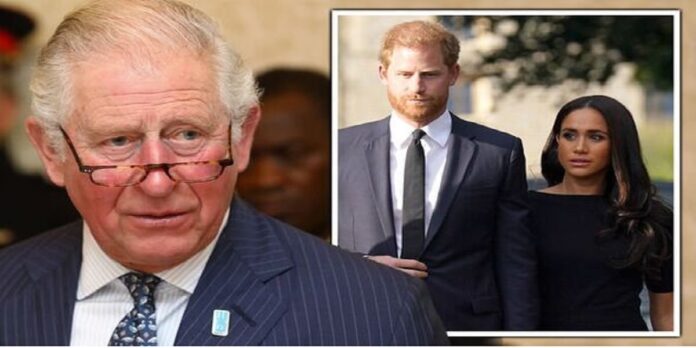 The monarch would also extend such a ban to the couple’s children Archie, three, and Lilibet, one, despite the late Queen refusing to take such a drastic step while alive,
King Charles is unafraid to strip Harry and Meghan of their titles should their Netflix show and memoir be too damaging to the Firm, a royal expert has claimed.

The monarch would also consider extending such a ban to the couple’s children Archie, three, and Lilibet, one, despite his mother – the late Queen – refusing to take such a drastic step while alive, claims royal author Tom Bower.

The author, who spoke to dozens of courtiers and family associates in the last two years, says he believes Hollywood actress Meghan, 41, will not back down should the Sussex’s royal titles be removed.

Mr Bower spelt out the hostilities and fragile relations between senior royals following their reunion at the Queen’s funeral service in London in September.

He revealed Charles has made efforts to “diffuse” the problem rather than simply strip them of their titles.

The author said: “He has made various threats to Meghan and Harry and warned that them if they go ahead they will find themselves ostracised in a way they cannot believe. And so they are worried.

“First of all, I do not think their children will get titles if they go ahead and slander the Royal Family.

“But they have also got to consider their own titles, the Duke and Duchess of Sussex, could be taken away by Charles if they misbehave.

“That is something Meghan and Harry are very worried about because after all although she pours dirt on the royal family the whole time, whenever she introduces herself she says: ‘I am Meghan, Duchess Of Sussex.’”

Harry, 38, is moving “full steam ahead with the memoir” after a tense London trip for the Queen’s funeral.

“In the end, they left Britain after the Queen’s funeral feeling as angry as ever, if not more,” Mr Bower added.

“Because they had been excluded from various events especially a reception for the heads of states, (Harry) not been allowed to wear his uniform and there was no reconciliation between them and Kate and William.

“The Sussexes released a photo of themselves to media, hours after The King unveiled his snaps with William and Kate.

“This was the resumption of hostilities from Montecito to the Royal Family.”

“It was a photo to say we can exist and flourish without you lot.

”Meghan is a fighter, and she is fighting again now.

“Harry is brainwashed, would be the politest way of saying it, into going along with it. He thinks he has been badly treated.

“But there is no doubt they are a great threat to the Royal family.

“Harry is a very complicated, depressed, unintelligent man who is seeking a role and has really has nobody on whom he could rely, which in the end is where Meghan stepped in. A needy man met a woman who helped him with his needs.”

Bower says that the Sussexes will always see themselves as targets.

“They are so hyper-sensitive and aggressive to those who criticise them. It is all part of the business for Meghan.

“She always wanted celebrity but wants to control the narrative.

“Anyone that gets in her way with her is ghosted and attacked. Harry has become hypersensitive, and hates the media but seeks approval from the media by going on Netflix, Spotify or Apple TV. The contradiction is enormous.

“They needed money, fame and to be able to tell their story on their terms.

“And what has changed is that in their trips to Britain they suddenly realized that they are going to lose their reputations. They have been given an ultimatum.

“Netflix is a great problem because Netflix reflects what is in Harry’s autobiography which has been ghosted (ghostwritten) for him.

“I am sure it contains a lot of very damaging material about Charles, William, Kate and of course against Camilla.”

NEWS admin - November 7, 2022 6248
Last time we checked Meghan was saying a buncha nice things about the Queen, but okay Charles. Meghan Markle and Prince Harry kinda have a...