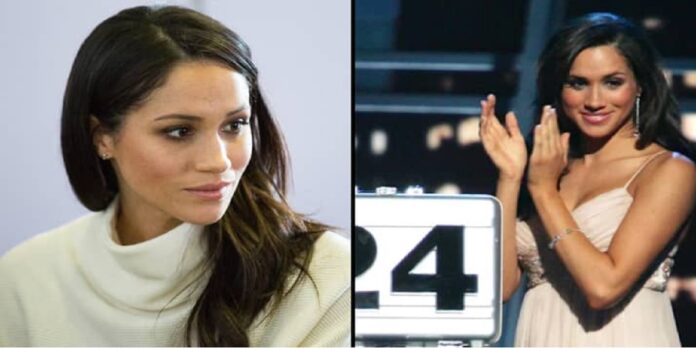 “There was a a very cookie-cutter idea of what we should look like,” said Meghan Markle said on her Achetypes podcast about her early-career time on NBC’s Deal or No Deal. “It was solely about beauty and not necessarily about brains.”

“I ended up quitting the show,” said Markle. “I was thankful for the job, but not the way it made me feel, which was: Not smart.”

The now Duchess of Sussex made her comments in introduction of the archetype being explored in the episode, which was “The Bimbo.”

“My experience on the show, which included holding said briefcase on stage, alongside 25 other women doing the same. It was for me, fascinating,” she said. “I had studied acting in college at Northwestern University, and like a lot of the other women standing on stage with me, acting was what I was pursuing. So while Deal or No Deal wasn’t about acting, I was still really grateful as an auditioning actress to have a job that could pay my bills.”
Camilla officially open up on why she hates Meghan Markle?
Markle recalled the fembot-like assembly line before each show in which so-called “Briefcase Girls” would be made ready. “All the girls, we would line up and there were different stations for having your lashes put on or your extensions put in, or the padding in your bra. We were even given spray tan vouchers each week because there was a very cookie cutter idea of precisely what we should look like.”

She said it contrasted greatly with how she experienced the women — and herself — outside the show.
Meghan Markle and Prince Harry Are Permanently Stepping Down as Working Royals AGAIN..SEE KING CHARLES RESPONSE
“I was surrounded by smart women on that stage with me, but that wasn’t the focus of why we were there,” she added. “And I would end up leaving with this pit in my stomach, knowing that I was so much more than what was being objectified on the stage. I didn’t like feeling forced to be all looks and little substance. And that’s how it felt for me at the time, being reduced to this specific archetype.”
The Real Reason Why Prince William Cannot Forgive His Brother Prince Harry