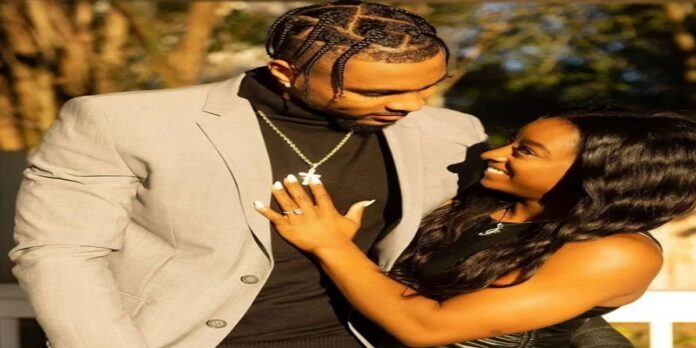 “You Almost Had the Ball”: Future Wife Simone Biles Being a Perfect Analyst for Jonathan Owens during Pre-season Training Recently

Simone Biles and Jonathan Owens are head over heels in love. After dating for two years, the duo announced their engagement in February. While Simone is the gymnast GOAT, Jonathan is the NFL star. A power couple, the two enjoy a massive fan following. Open about their relationship; the two never sigh away from expressing their life.

In a recent video by Houston Texans, Owens and Biles were caught unguarded. Fans love to hear from the two. But what does the duo talks about? Let’s find out.

In the video, seemingly after the match, Jonathan and Biles were seen discussing the game. The two are deep into their conversation. Giving feedback on the same, the Olympic gold medalist was heard saying, “You almost have the ball over there, but you missed it.”

On realizing they were being captured, Jonathan said to his fiancee, “You see the camera, wanna say what’s up?” Though Simone saw the camera, she does not paid much attention to it. She further continued into their conversation. After some time, she was quoted saying, “I think I got a video. I will send it to your mom.”

Though it was not very clear up to that moment as to which particular video she was referring to. Referring to the footage she captured, Owens added, “Yeah, when I broke the ball up.” Further into the video, Jonathan was also heard asking Biles about his performance. He quoted, “You think I should have broke faster?” Though the two were seemingly in a somber mood. The video intended to capture the sweet chemistry that they share.

The two love birds growing firm in their relation

After Simone broke up with her ex-boyfriend, Stacy Ervin Jr., things were not easy for her. Going through a difficult phase, the young gymnast could hardly fathom that she would fall in love again. Simone met Owens for the first time on a dating app.

She was smitten at first sight. Impressed by his charisma, Simone approached him, and as luck would have it, the football star reciprocated the feelings. Soon attraction transformed into love, and the two became inseparable before they could even understand.

Life changed better for the two. Growing strong with each passing day, the two are now planning their wedding. They are expected to tie the knot before the 2023 NFL season.