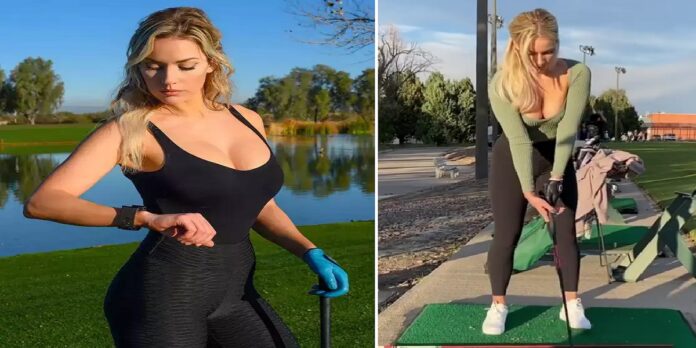 Golf sensation Paige Spiranac risked a wardrobe malfunction while placing a ball on her tee before unleashing a huge drive she perfected as a professional.

The social media personality and golf instructor, who was named as the Sexiest Woman Alive in Maxim’s 2022 Hot 100 list, uploaded the clip to Instagram where she has 3.6million followers.

The 29-year-old’s latest upload has brought in 122,000 likes in under 24 hours, with some viewers noting that her short skirt almost rose than she might’ve bargained for during the placing of the ball.

One follower wrote in response: “I see what you did there.” With a second added: “Beautiful swing.”

A third said: “I think I need to start golfing again!” And a fourth agreed: “That swing and outfit is on fire!”

Earlier in the week Spiranac admitted that she felt under pressure to look good having grown tired of being body shamed online.

Speaking on her YouTube channel, she said: “I know I put myself online in the public eye and I know I have made my body part of my brand, so I get that I’m going to get lots of critics and trolls.

“However, do I really deserve it? Does anyone? I’ve been talking and thinking a lot about this lately.”

Spiranac turned professional back in December of 2015 having played college golf at both the University of Arizona and San Diego State University.

Having left the professional circuit in August of 2016, Spiranac has turned her skills to social media and since posted hundred of instructional videos on YouTube.

She added: “That is just how this has progressed. And so I know that my body will always be criticised, because I put it out there and I need to be able to accept that.”

NEWS admin - November 8, 2022 13207
WTA Finals Preview: Aryna Sabalenka shocked Iga Swiatek. Can she close Fort Worth with a win over Caroline Garcia? Either Sabalenka or Garcia will earn...