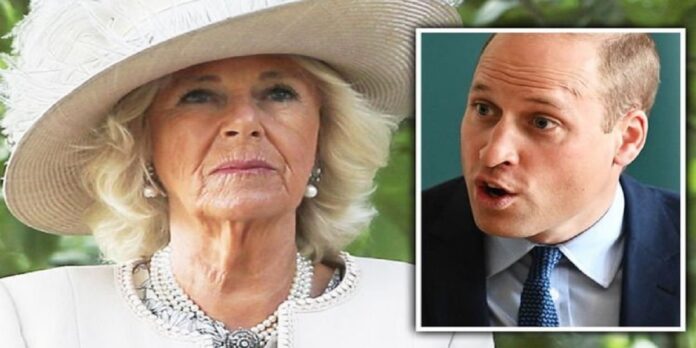 Princes William and Harry may have learned to accept Camilla Parker-Bowles over the years, but that doesn’t mean they’ve fully embraced her as a member of the family—at least not according to a new royal biography.

Apparently, the Prince of Wales doesn’t want Camilla to play a bigger role in his children George, Charlotte and Louis’ lives than is strictly necessary.

“William has made it clear that Camilla is the wife of his father, but not a step-grandmother to his children,” writes royal author Angela Levin in Camilla: From Outcast to Queen Consort (opens in new tab) (via the Daily Star).According to William, his kids have “two grandfathers but only one grandmother.” Of course, it makes sense that he would want to make sure that his late mother Princess Diana isn’t erased from the picture now that Charles is remarried.

“William and Harry were 23 and 20 respectively when Camilla officially became their stepmother in 2005,” Levin writes.

“She was more of a friendly grown-up they saw occasionally at royal gatherings. She tried to be encouraging rather than influential.”

According to Levin, Camilla is more than content to take a background role in the Wales kids’ lives: She probably doesn’t feel they’re lacking in love and support, given that they’re well surrounded by the Middleton family.

“Nor has she tried to take over any responsibility as a step-grandmother to the Cambridges’ children, Prince George, Princess Charlotte and Prince Louis, especially as Catherine’s parents, Carole and Michael Middleton, are so close,” Levin continues.

These days, the children will have extra opportunities to spend time with the Middletons, because they have moved to Windsor, just an hour’s drive from Carole and Michael’s home in the same county of Berkshire.

NEWS admin - November 8, 2022 13227
WTA Finals Preview: Aryna Sabalenka shocked Iga Swiatek. Can she close Fort Worth with a win over Caroline Garcia? Either Sabalenka or Garcia will earn...