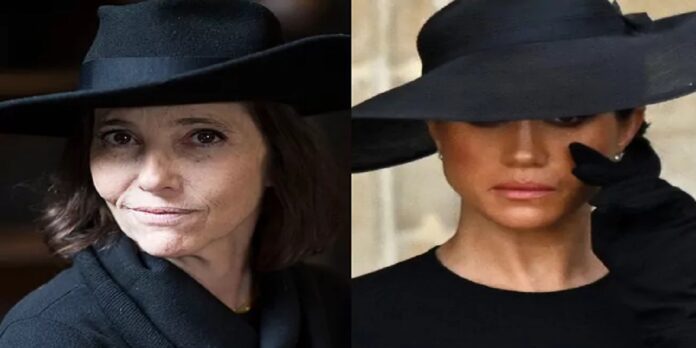 Calls treatment of the Royals to the Duchess of Sussex ‘treasonous’

In an exclusive interview with The Post, a relative of King Charles III revealed that the British royal family has a long history of hazing newcomers and that only those who are “tough as nails” manage to survive.

Christina Oxenberg, a third cousin of King Charles III and a descendant of Serbian nobility, remarked to Meghan Markle, ” What you are going through is a hellish kind of hazing.”

“If she can just hang in there, someone else will come along who can take the heat. Nobody gets a pass,” and that includes Kate Middleton.

The 59-year-old Oxenberg is the younger sister of the actress Catherine Oxenberg and a writer and fashion designer. Princess Elizabeth of Yugoslavia, who was very close to Charles, is their mother.

Christina Oxenberg opens up about the Royals

The snobbery previously whispered behind the new Princess of Wales’ back was recalled by Oxenberg, who has spent the most of her life surrounded by British royals.

The royal family found it amusing that Middleton was referred to as “Kate Middle Class” by the British press when Prince William, the current heir to the throne, was dating her prior to their 2011 wedding, according to Oxenberg.

The Middleton family’s parents, Carole and Michael, are purportedly referred to as “Meet the Fockers” by Camilla, the current queen consort, according to the Express.

“They thought it was all very funny – Kate Middle Class and Sarah Ferguson and Koo Stark,” Oxenberg said. “They meant no disrespect; after all, she is the future queen of England.”

Andrew was involved in a friendship with convicted pedophile Jeffrey Epstein while he was married to Sarah Ferguson from 1986 to 1996. In March, the prince reached a settlement with sexual abuse accuser Virginia Roberts Giuffre, paying her a reported $12 million after she claimed she was made to have three sex encounters with him when she was 17 years old.

The British socialite Ghislaine Maxwell, who is appealing a 20-year sentence after being found guilty of aiding in the acquisition of young women and girls for Epstein, has confessed that Oxenberg was formerly a confidante of Maxwell.
Oxenberg says it’s not the first time the Royals act like this

Princess Marie of Kent, formerly Marie Christine von Reibnitz, a baroness of German-Czech ancestry, was one of the other future royals who endured their fair share of hazing, according to Oxenberg.

British royals took great pleasure in picking on von Reibnitz when she wed Prince Michael of Kent, a first cousin of Queen Elizabeth II, in 1978, Oxenberg told The Post.

She nonetheless referred to the treatment of Meghan by the British media, which is closely monitoring her every step, particularly during Monday’s funeral for Queen Elizabeth, as nothing less than “treasonous.”

“She is Harry’s choice of wife,” Oxenberg said. “By their own metrics they have called it a class system. They came up with that system, [by which] you have to respect Harry’s choice.”

Have I just paid for Prince Andrew to settle with Virginia Giuffre?

The Royal Family are funded by the UK tax payer, has this allowed the Duke of York to dodge a people trafficking case?

If so, the funding of the Royal Family must be reviewed immidiantly#whopaid#Epstein pic.twitter.com/1rOnJJvskH

NEWS admin - November 8, 2022 13207
WTA Finals Preview: Aryna Sabalenka shocked Iga Swiatek. Can she close Fort Worth with a win over Caroline Garcia? Either Sabalenka or Garcia will earn...