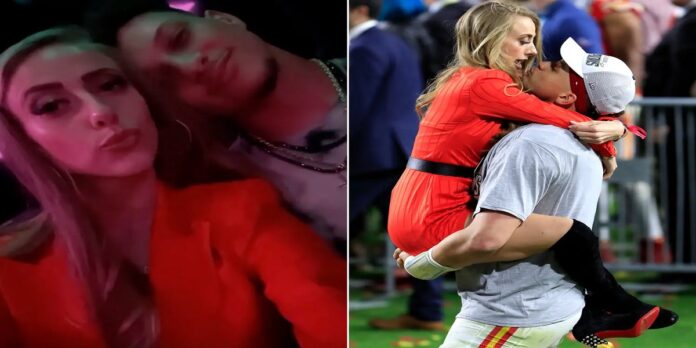 Even after over a decade together, lovebirds Patrick Mahomes and Brittany Mahomes only have eyes for each other — and their newest couple’s photo proves that.

Even after over a decade together, lovebirds Patrick Mahomes and Brittany Mahomes only have eyes for each other — and their newest couple’s photo proves that.

In the first photo, we see Brittany rocking a floor-length blue ensemble that perfectly shows off her growing baby bump. She has her hair in a chic, low ponytail, along with some dark makeup to compliment the look. Patrick is rocking an all-black casual look of a t-shirt and ripped jeans. They’re smiling for the camera before turning to one another in the next photo.

In the second photo, everyone’s hearts melted instantly at the look of love they’re giving one another as if they’re the only people in the whole world. After so many years together, they’re still so in love!

In case you didn’t know, these two have been together since high school. They started dating when Patrick was in 10th grade when he was a baseball pitcher, and she was a cheerleader. They dated all throughout high school, attending prom and sports games together, per New York Post.

Once college hit, they went long-distance for a few years before Patrick eventually popped the question in late 2020 at Arrowhead Stadium, with them eventually marrying in May 2022 at a gorgeous ceremony in Hawaii.

They share one daughter together named Sterling, 1, and are expecting a baby boy soon!

Brittany told Today back in Dec. 2020 about when they went long-distance for college, saying, “He ended up going to Texas Tech, and that’s when it really hit me, ‘Oh sh-t, he might go play professional football.’”

She added, “It was surreal to see him living his dream, and seeing him grow as an athlete and as a man, in general, was just amazing.”

NEWS admin - November 8, 2022 13244
WTA Finals Preview: Aryna Sabalenka shocked Iga Swiatek. Can she close Fort Worth with a win over Caroline Garcia? Either Sabalenka or Garcia will earn...