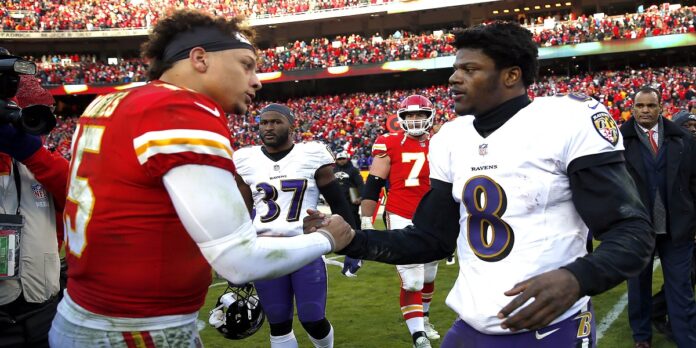 Former pros see the difference in Kansas City’s quarterback, who is terrorizing the league again even without All-Pro wide receiver Tyreek Hill

The evolution of Kansas City Chiefs quarterback Patrick Mahomes has been a process to behold.

Mahomes has reinvented his game before our eyes, morphing — out of necessity — from a quick-strike superstar to one of the NFL’s truly patient performers. And, most importantly, the Chiefs have remained among the league’s elite teams while Mahomes, coach Andy Reid and offensive coordinator Eric Bieniemy developed a new formula.

The Chiefs’ offense is much different from the one Mahomes took charge of during his record-setting second season in the NFL, and it’s certainly less pleasing aesthetically for fans of long passes. But the object is to win games — and the Chiefs still look great in that area.

Kansas City (3-1) is atop the AFC West Division, which it has won the previous six seasons. Mahomes is tied for the league lead in touchdown passes (11), ranks first in Total QBR (82.3) and second in passer rating (108.4).

It appears Mahomes has already adjusted well to a new-look receiving corps that underwent a major offseason makeover. All-Pro wide receiver Tyreek Hill wanted more money than Chiefs management was willing to pay him, so Hill was traded to the Miami Dolphins.

It was fair to wonder how the Chiefs would fare without arguably the NFL’s most dominant wideout. Some in the team’s locker room likely had questions as well, because Hill is a game changer.

However, Mahomes, Reid and Bieniemy adjusted, leaning more on a running game buoyed by one of the league’s best offensive lines, and using more short- to mid-range passes. That’s also the area of the passing game in which All-Pro tight end Travis Kelce does his best work.

From the outside, the Chiefs’ balanced offense looks beautiful, Hall of Famer Warren Moon said.

Moon, the only Black passer enshrined in the Pro Football Hall of Fame, said the Chiefs have played things perfectly.

“What I see from him [Mahomes] is a much more patient quarterback, and a lot of this comes from what he went through last year,” Moon told Andscape on the phone Wednesday. “[Opponents] tried to slow them down last year by playing a lot more ‘umbrella’ coverage.

“Teams wanted to see if he would keep taking the underneath routes, not get impatient and try to force it downfield. In the beginning last year, he was impatient. He did force it, because he was used to having all those big plays with Tyreek and the other guys. He got used to it. But he finally settled in and figured out that this was the best way to go about it.

“Now, this year, you can see he’s being much more patient. He’s taking his time to take his shots down the field. And what they’re doing now is getting the ball out quickly. They’re really giving guys a chance to run after the catch. It’s clearly their approach. So, it’s not the big strikes down the field like they used to get in his first few years, but it’s working.”

The Chiefs’ impressive running game is working quite well, too.

During the 2021 NFL draft, Kansas City general manager Brett Veach again proved that he’s one of the league’s most astute talent evaluators. Veach hit home runs in selecting center Creed Humphrey in the second round (63rd overall) out of the University of Oklahoma and guard Trey Smith in the sixth round (226th overall) from the University of Tennessee.

Quickly, Humphrey and Smith became key members of an O-line that helped the Chiefs manhandle the powerful Tampa Bay Buccaneers’ defense in a 41-31 Week 4 victory. The Chiefs had 228 yards passing — and 189 yards rushing.

Saturday, who played center for 14 years in the NFL and was a six-time Pro Bowler and a two-time All-Pro, said the Chiefs’ offense oozes versatility.

“They have a very good offensive line. It’s very physical. And you look at the way they’re playing and using their run game, they’re trusting that they can go do that [run the ball against anyone],” Saturday said. “That’s allowing [Mahomes] to use all the pieces and parts of his offense.

“And as a quarterback, when you’ve been slinging it, and putting up numbers like he has, and been a part of every MVP conversation … I think it’s hard to dial yourself back. It’s hard to retrain yourself and discipline yourself to then let the game come to you. But that’s what he’s doing.”

Continuing along this path will only help Mahomes and the Chiefs, Moon said.

“This will make him more efficient for the remainder of his career,” Moon said. “Especially as he gets older and when those legs won’t let him run around as much and do all the things he does now.

“What makes him so dangerous now is that he’s being patient, he’s making the right reads, he’s getting the ball out of his hands. But when things to break down, he has that uncanny ability to run around and still make a touchdown out of something most guys just can’t do.

“One day he’s not going to be able to run around and do all of that stuff. But because he’s doing this now with being more patient, reading the defense a little bit more and going to his second and third reads, these are the things that are going to make his career a lot longer.”

And trust us on this: Mahomes doing things to elongate his career at a high level is the last thing Chiefs’ opponents want.