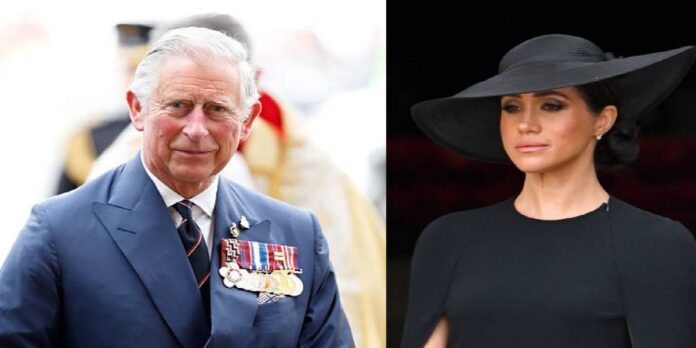 Many members of the Royal Family have nicknames within the Firm, and Meghan Markle is no exception.

King Charles III has an affectionate nickname for his daughter-in-law, it has emerged. The Duchess of Sussex is known to the new King as “Tungsten”, according to a new book.

Tungsten is a hard steel-grey metal that has the highest melting point of all metallic elements.

It’s believed King Charles calls the Duchess this because of her tough nature.

Royal expert Katie Nicholl revealed the Duchess’ unusual nickname in her book ‘The New Royals: Queen Elizabeth’s Legacy and the Future of the Crown’.

In the book, she wrote: “Charles reportedly nicknamed his future daughter-in-law ‘Tungsten’ because of her toughness and resilience”.
Ms Nicholl explained that the nickname was given to her when she showed resilience during her appearance at the Royal Foundation Forum in 2018, alongside Prince Harry, Prince William and Kate.

She wrote: “It was, according to one aide, the moment William and Kate, who was heavily pregnant, realised they needed to up their game.

“The Cambridges [now the Prince and Princess of Wales] had already signalled their intention to be more than ‘ornamental royals’ and had, along with Harry, made a huge success of their mental health campaign Heads Together.”

She said Meghan, during the appearance, was funny, polished and passionate about the work she spoke about.

Ms Nicholl added: “But Meghan was the breakout star of the foursome. She was polished, passionate and funny, using all her TV-honed skills to present her case.

“That was a wake-up moment for William and Kate when they realised that Meghan was very impressive, very confident and very capable, according to a source.”

The Fab Four were pictured at the event four years ago.

Since then, Harry and Meghan have stepped back from their duties as senior working royals and have moved to the US.

The Duke and Duchess of Sussex returned to the UK last month and remained in the country for Queen Elizabeth II’s funeral and the royal mourning period.

It is the second time they have been back to the UK together in 2022.
They also returned in July for Queen Elizabeth II’s Platinum Jubilee celebrations.

NEWS admin - November 8, 2022 13245
WTA Finals Preview: Aryna Sabalenka shocked Iga Swiatek. Can she close Fort Worth with a win over Caroline Garcia? Either Sabalenka or Garcia will earn...