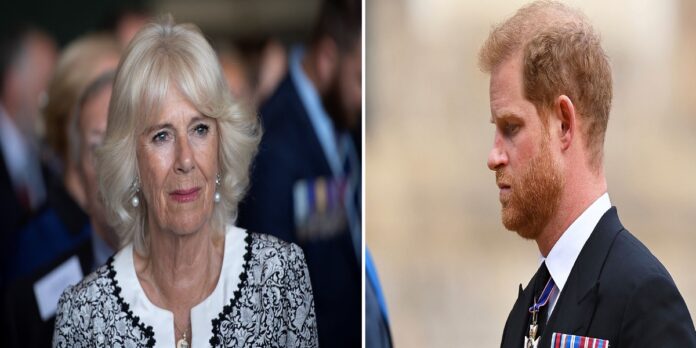 When Prince Harry watches his stepmother, Camilla, Duchess of Cornwall, take her place on the balcony at Buckingham Palace on Thursday, following the Trooping the Colour ceremony, insiders say it will be a “difficult moment” for the renegade royal.

As non-working members of the family, Harry, 37, and his wife, Meghan Markle, 40, have not made the cut to watch the famous Royal Air Force fly-past from the iconic balcony.

The military event will mark the start of Queen Elizabeth’s Platinum Jubilee celebrations, which continue through Sunday.

Things are more fractious now that the Queen has given her blessing for Camilla, 74, to be named “Queen Consort” when Prince Charles, 73, becomes king.

A highly placed royal source said that while Harry’s older brother, Prince William, has grown used to Camilla, his father’s former mistress, Harry will never fully accept her. Nor will he forget that it was his late mother, Princess Diana, who was once meant to be queen — or Diana’s famous quote about Charles and Camilla’s affair: “There were three of us in this marriage, so it was a bit crowded.”

“Years of hard graft [hard work] from Charles’ courtiers have gone into making Camilla palatable to the British public, and the world at large. And Camilla has worked tirelessly to ingratiate herself — she’s been by Charles’ side for 16 years of marriage,” said the source.

“But Harry will never truly love her, his mother was meant to be queen, and Camilla will always be the woman who led to his parents’ divorce. This will be the first time that Harry has not joined his family on the balcony at Buckingham Palace, and I’m sure it will be a difficult moment.”

When Charles and Camilla married in 2005, the couple said she would not use Diana’s title, Princess of Wales.