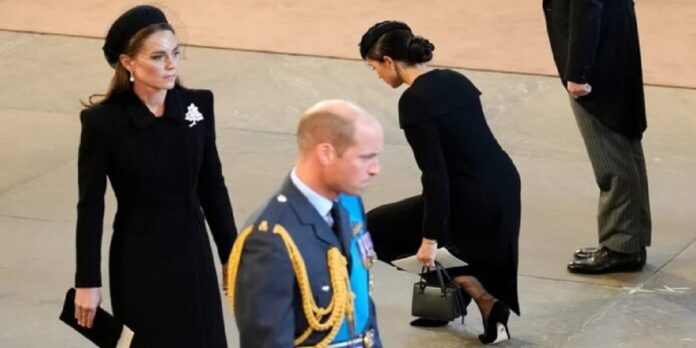 After the Duke and Duchess of Sussex stepped down as working members of the royal family, they made it abundantly clear that they bore no ill will towards Prince Harry’s grandmother by making a grand gesture: They named their daughter Lilibet, a family nickname for Queen Elizabeth II, per BBC News.

But Meghan Markle and Harry’s bombshell interview with Oprah Winfrey undeniably put a strain on their relationship with the royal family. The couple accused an unnamed royal of engaging in racist behavior and alleged that Kate Middleton made Meghan cry ahead of her wedding to Harry. The claims ruffled a few royal feathers, and the queen herself released a statement that seemed designed to cast doubt on the couple’s accusations. “While some recollections may vary, they are taken very seriously and will be addressed by the family privately,” she said, per People.

But Elizabeth also let it be known that she had no interest in cutting her grandson and his family out of her life completely. “Harry, Meghan and Archie will always be much loved family members,” she added. Proof of this came the following year during the queen’s Platinum Jubilee. While she was unable to attend many events due to her declining health, Elizabeth did make time to meet her namesake for the first time, Us Weekly reported. And Lilibet’s name wouldn’t be Meghan’s last tribute to Her Majesty — the way the Duchess of Sussex paid her final respects to the queen left many social media users in awe.

During Queen Elizabeth II’s procession in Westminster Hall, Meghan Markle was photographed curtsying in front of Her Majesty’s coffin in a final farewell. The gesture moved many on social media, who applauded the act of respect and how expertly the Duchess of Sussex executed the dip. “Meghan Markle did that deep curtsy in heels then easily got up and walked away. Respect to her and her knees,” tweeted one fan. “My girl hit that curtsy. So classy, elegant, and respectful,” wrote another admirer. Meghan’s critics even had to begrudgingly admit that she nailed the gesture. “I’m not the biggest fan of Meghan Markle but fair play, that was a damn good curtsy,” read a third tweet.

Meghan’s acute-angled knee bend seemed to be a callback to her first encounter with the late queen. In her interview with Oprah Winfrey, the Duchess of Sussex recalled how Prince Harry didn’t think to ask her if she knew how to curtsy until she was moments away from meeting his grandmother for the first time. Sarah Ferguson, Duchess of York gave Meghan a crash course in how to properly curtsy before the actor had to put on a performance that you’d think would be an unforgettable moment in her life. However, this wasn’t the case. “Apparently, I did a very deep curtsy — and I don’t remember it,” Meghan revealed.

Like Catherine, Princess of Wales, Meghan Markle has used accessories as a wordless way to show her deep reverence for Queen Elizabeth II. For a luncheon at Buckingham Palace, the Duchess of Cornwall wore a pair of earrings and strands of pearls that once adorned the queen’s person, per People. Elizabeth regularly wore the pearl necklace, but Catherine has seemingly adopted the diamond and pearl earrings as a favorite piece — she’s already worn them four times since the queen’s death. Meghan, Duchess of Sussex, chose to wear earrings with a similar significance for the queen’s lying-in-state service at Westminster Hall, Vogue notes. However, the difference is that Meghan’s smaller diamond and pearl earrings were gifted to her for keeps while Elizabeth was alive, according to royal reporter Emily Andrews.

The gift was a thoughtful gesture by Her Majesty, who possibly realized that Meghan might be a bit nervous ahead of her first joint solo engagement with the monarch in 2018. Per Town & Country, the dynamic duo visited Cheshire to attend a number of events together, including a memorial service for the victims of the tragic Grenfell Tower fire.

When Meghan Markle got her first taste of what it was like working alongside Queen Elizabeth II, the royal was considerate of the newbie’s comfort inside their shared car. “[The queen] has a blanket that sits across her knees for warmth, and it was chilly and she was like, ‘Meghan, come on,’ and put it over my knees as well,” Meghan recalled in her Oprah Winfrey interview. The Duchess of Sussex was appreciative of this gesture and praised the queen for always treating her with kindness.

The actor also reportedly earned the queen’s respect in 2019 by embarking on a tour of Morocco with Prince Harry as she approached her eighth month of pregnancy. “The queen is amazed by the duchess’s energy and stamina given that she is so heavily pregnant,” a palace insider later told Vanity Fair.

When the Duke and Duchess of Sussex tied the knot in 2018, there was some chatter that Meghan had disrespected Her Majesty by failing to curtsy in her presence, Page Six reported. However, one Twitter user pointed out that the online outrage was misguided — right before Meghan dipped down in her wedding gown, the camera panned to an overhead shot that made her curtsy difficult to see. But even Meghan’s biggest critics can’t deny that she curtsied to the queen one final time in honor of her memory.