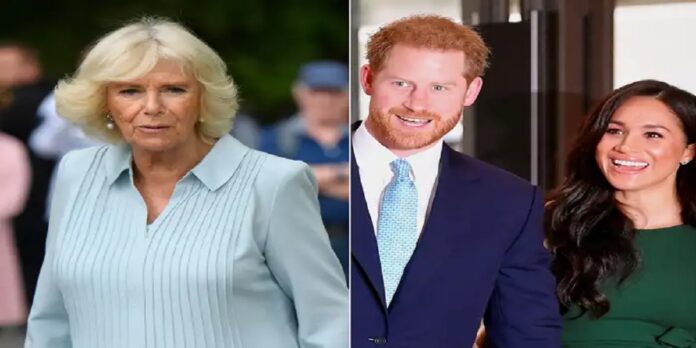 After Prince Harry suggested an impartial third party sit in on a meeting with him, wife Meghan Markle, father Prince Charles (now King Charles III), and stepmother Camilla, Duchess of Cornwall (now Camilla, Queen Consort), Camilla spat out her tea in shock, according to a new book from royal expert Katie Nicholl.

The exchange apparently happened back in April, when Harry and Meghan stopped off in the U.K. en route to The Hague, Netherlands for the Invictus Games. Charles insisted on meeting with the Duke and Duchess of Sussex before the couple met with the Queen, and Harry was met with stunned looks from both Charles and Camilla after suggesting a mediator sit in on an awkward family meeting, per The Mirror.

In her book The New Royals: Queen Elizabeth’s Legacy and the Future of the Crown (opens in new tab) (out October 4), Nicholl writes the Sussexes were late for the talk and had just 15 minutes with Charles and Camilla before the new King and Queen Consort had to leave for the Royal Maundy Service at Windsor Castle.

Charles and Harry “greeted each other warmly,” but there were still moments of tension, particularly when Harry suggested the mediator. “Harry went in with hugs and the best of intentions and said he wanted to clear the air,” a family friend said. “He actually suggested that they use a mediator to try and sort things out, which had Charles somewhat bemused and Camilla spluttering into her tea. She told Harry it was ridiculous and that they were a family and would sort it out between themselves.”

At the time, The Mirror reports, Prince William and Kate Middleton were on a skiing trip with their three children and did not change their plans to return home for Harry and Meghan’s visit.

Tensions continue up to the present day, as the Sussexes are now home in California following the Queen’s funeral earlier this week. By the end of the year, Harry’s memoir is due, which will loom like a cloud over the family’s head until its publication, experts say.

“Harry will no doubt be torn between wanting acceptance from his family and also the love of his wife,” royal expert Robert Jobson wrote in The Sun. “But he has now left himself in a catch 22 situation. He has signed a four-book deal worth millions with Penguin Random House. He needs the money to fund his flash Californian lifestyle. Once that book, which is now written, hits bookshelves, there will be no going back for Harry.”