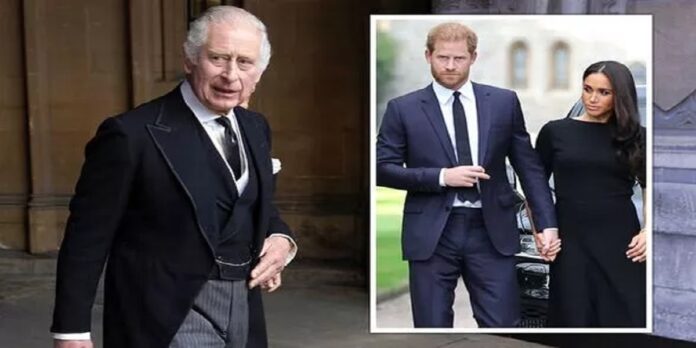 Prince Harry and Meghan Markle have been residing in the UK while the Royal Family grieves the death of Queen Elizabeth II.
In recent weeks, Prince Harry and Meghan Markle have made several public appearances. The Duke and Duchess of Sussex flew to the UK for a string of charity events earlier this month, but have stayed for longer following the sad death of Harry’s beloved grandmother, Queen Elizabeth II.

Harry and Meghan poignantly joined Prince William and Kate Middleton, the new Prince and Princess of Wales, for a walkabout in Windsor over the weekend.

The royal four met members of the public who had crowded outside to pay their respects, and they viewed the many flower tributes left to the monarch at her Berkshire home.

While many were delighted to see the two royal couples united again since Harry and Meghan have spent most of the last two years in the US, it seems unlikely the Sussexes will take on public royal roles during the reign of King Charles III.

Royal historian Marlene Koenig said: “William is now the Prince of Wales, Duke of Cornwall and Cambridge, and in Scotland, the Duke of Rothesay.

“He will be taking on more duties, formal and official, more responsibilities.”

The historian added: “The Princess of Wales will also have more roles, official and formal. [Also] more patronages as she is the wife of the heir apparent and future Queen Consort.”

The Sussexes, however, will likely continue to pursue their careers in the US as they have done since stepping down as working royals in March 2020.