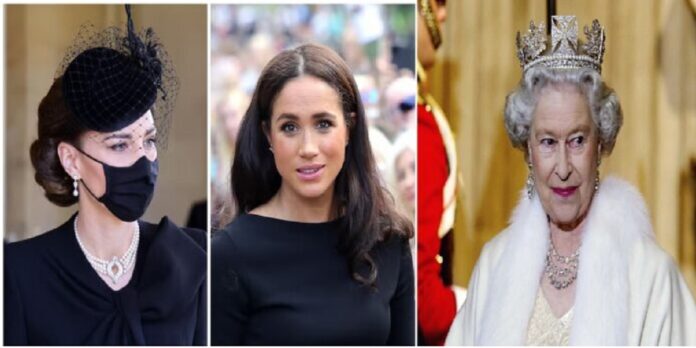 We know that throughout her life, Britain’s longest-reigning monarch loved dogs, so of course, royal fans wanted to know where her beloved corgis and dorgi are going. Multiple outlets have confirmed they will now live with Prince Andrew. The queen also loved her jewelry as some pieces in her collection were gifts from her late father King George VI, her late husband Prince Philip, and other relatives. Now, many want to know what’s going to happen to her jewelry and if Prince Harry’s wife Meghan Markle or the new Princess of Wales, Kate Middleton, will inherit any.

Queen Elizabeth’s jewelry collection is separate from the Crown Jewels

At the time of her death, Queen Elizabeth had an estimated net worth of $600 million per Celebrity Net Worth. That number is for her personal assets, not the assets of The Crown Estate which is estimated to be in the billions.

When it comes to the royal jewelry collection, that too is separated into two parts: what the late monarch personally owned and the Crown Jewels. Jewelry expert Ella Kay told Express that the latter are “regalia used in ceremonies of state, like corporations” and are “owned by the sovereign in a trust.” The queen’s personal collection on the other hand is thought to be worth $100 million and any jewels that she inherited, were gifted to her, or she bought herself are what would be passed on to her loved ones.

“I’d say the majority of her jewelry is part of her personal collection. That includes everything from the pearl earrings that she [wore] on a daily basis to her brooch collection and her tiaras, as well as the jewelry she inherited from Queen Mary and the Queen Mother,” Kay explained.

Her collection consists of more than 300 pieces including 98 brooches, 46 necklaces, 37 bracelets, 34 pairs of earrings, 15 rings, 14 watches, and five pendants.

So now that we know what’s in Queen Elizabeth’s collection, the question is who gets what?

The Court Jeweller Lauren Kiehna, who spoke to Page Six about the subject, said: “We don’t know every detail about the ownership of all of the royal jewels, and it’s likely that we won’t be privy to much detailed information about their inheritance now. Royal wills are sealed, so we can’t look to those documents for guidance.”

However, according to Kiehna, there’s no reason to believe the collection won’t go to King Charles III. “I think it’s very likely that the queen has followed in the footsteps of her grandmother, Queen Mary, and her mother, Queen Elizabeth the Queen Mother, and bequeathed all of her jewelry directly to the new monarch, King Charles III.”

Because Charles and his heir Prince William are both males, Camilla, Queen Consort will have her pick of the jewels she wants. Then Kate will be next in line to choose what she likes.

That means that the Duchess of Sussex won’t get anything as her husband is further down the line of succession after the Prince and Princess of Wales’ children.

Some in India have demanded 1 diamond be returned

Many have also wondered what may happen to one diamond in particular.

Following the monarch’s death, the word “Kohinoor” began trending as Twitter users in India demanded that the diamond be returned. The diamond dates back to the 16th century. Governments in Iran, Afghanistan, and Pakistan, have also laid claim to the gem.

According to TIME, the Persians seized it from Moguls, and then the Afghans took it. The Sikh Maharaja, Ranjit Singh then brought it back to India after taking it from Afghan leader Shah Shujah Durrani. The British gained possession of the stone during the annexation of Punjab. The diamond was given to Queen Victoria. It was set at the front of a crown which became known as the Queen Mother’s crown after Queen Elizabeth II’s mom wore it on a number of grand occasions.