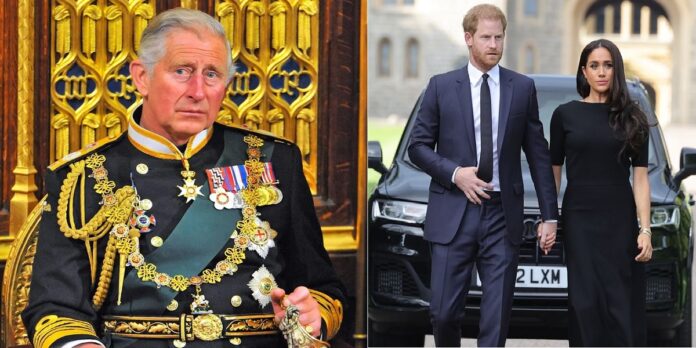 King Charles III expressed his love for Prince Harry and Meghan Markle during his first speech that also ruled out an early exit as monarch.The 73-year-old used his first public broadcast as head of state to offer his younger son an olive branch after an emotionally intense 24 hours, which saw Elizabeth’s death announced minutes before Harry’s plane landed in
Aberdeen.

King Charles 111 wants the whole world to know that Prince Harry, Meghan Markle and the children are part of the royal home wherever they are in the world. He wants the world to know that his daughter in-law who is not white is part of the family and appreciated. King Charles decided to proved the wrong with the notion that Meghan Markle is hated by the royal family.

He said: “I want also to express my love for Harry and Meghan as they continue to build their life overseas.” Royals including Harry, Prince William and Prince Andrew scrambled to Scotland on September 8 in an effort to say goodbye before the queen’s passing. Charles and sister Princess Anne were with the queen in her final moments but her other children and grandchildren did not complete the journey in time. Harry and his team were left organizing their own travel to Aberdeen Airport while other royals caught a plane together.

The Duke of Sussex was then the first to leave on Friday morning, catching a plane back to Windsor where Newsweek understands he and Meghan will continue to base themselves until after the queen’s funeral. Charles said the ceremony would be in a little over a week, though no specific date has been set. He also ruled out an early handover to Prince William, as he renewed the queen’s commitment to a life of service, and gave his eldest son his title Prince of Wales. Kate Middleton was also given Princess Diana’s title, Princess of Wales, in a move that will likely see her referred to in the future as Princess Catherine.

Charles said: “Today I am proud to create him Prince of Wales. The country whose title I’ve been so greatly privileged to bear during so much of my life and duty. With Catherine beside him, our new Prince and Princess of Wales will, I know, continue to inspire and lead our national conversations helping to bring the marginal to the center ground where vital help can be given.”

He added: “In a little over a week’s time we will come together as a nation as a Commonwealth and indeed a global community to lay my beloved mother to rest. In our sorrow, let us remember and draw strength from the light of her example. On behalf of all my family, I can only offer the most sincere and heartfelt thanks for your condolence and support.

“They mean more to me than I can ever express. And to my darling mama as you begin your last great journey to join my dear late papa I want simply to say this: Thank you, thank you for your love and devotion to our family and the family of nations you have served so diligently all these years. May flights of angels sing thee to thy rest.”