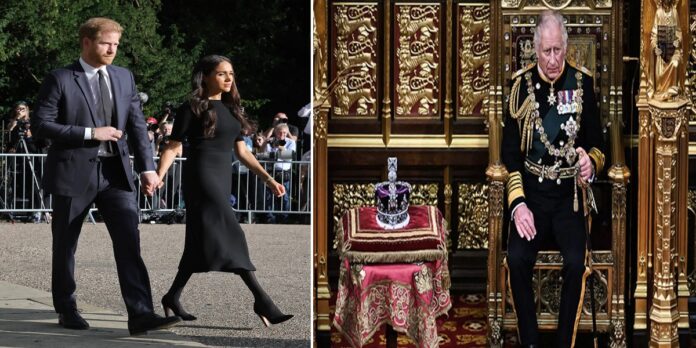 As the new monarch visits Wales today, he’s been advised to use his reign to mark a turning point for the Sussexes’ relationship with the wider Royal Family.

King Charles III has been handed a five-point manifesto to ensure he kicks off his reign of the United Kingdom in a “bold” fashion. The new King has been mourning Queen Elizabeth II, and will visit Wales on Friday before Her Majesty’s funeral on Monday. Peter Hunt, former BBC correspondent and presenter, posted five recommendations for the new monarch on Twitter.

He said: “A manifesto for a bold start to the reign of King Charles:

Apologise for his family’s role in the slave trade
Pay inheritance tax
Give Harry back his honorary military appointments
Bring Harry and Meghan in ‘from the cold’
Buy a good pen.”

People took issue with Mr Hunt’s tongue-in-cheek recommendations, with Twitter users angered by the mention of the slave trade. User @hitchfan1 said: “His family weren’t involved with the slave trade, his ancestors were. Unlikely. “No. No. The pen is a good idea though.” Mr Hunt jokingly replied: “One out of five is a start.” King Charles has struggled with gaffes since becoming monarch, with a leaking pen causing him to get frustrated.

At Hillsborough Castle, an official residence in Northern Ireland, with Camilla, Queen Consort, the King was angered after pen leaked while signing a book. Charles realised he had initially signed the wrong date and then complained about the pen he was using, saying: “Oh god I hate this (pen)!” Charles said, standing up and handing the pen to his wife, Camilla, Queen Consort. Camilla said “oh look, it’s going everywhere” as her husband wiped his fingers, with Charles saying “I can’t bear this bloody thing … every stinking time” as he walked away. It comes as the New York Times published an article which claimed the new monarch “disconnected” for enjoying tax privileges while the British public is “reliant on food banks”.

In the New York Times’ article, it said that Charles as the Prince of Wales spent “half a century turning his royal estate into a billion-dollar portfolio”. It described how King Charles III would take Queen Elizabeth II’s portfolio and inherit a share of her personal fortune tax free “‘while British citizens normally pay around 40 percent inheritance tax”. The article’s authors Jane Bradley and Euan Ward then said: “His lifestyle of palaces and polo has long fueled accusations that he is out of touch with ordinary people. And he has at times been the unwitting symbol of that disconnect.”

Later on Friday, Charles and Camilla will attend a prayer and reflection service for the Queen at Cardiff’s Llandaff Cathedral. As part of the King and Queen Consort’s final visit to the UK’s four nations, they will attend an event at the Senedd in Cardiff Bay.

Cardiff council said people should expect very long queues, with entry to the castle grounds on a first-come, first-served basis. People have also been invited to line the route as the King approaches the castle and to leave flowers on the lawn on either side of City Hall’s main entrance.