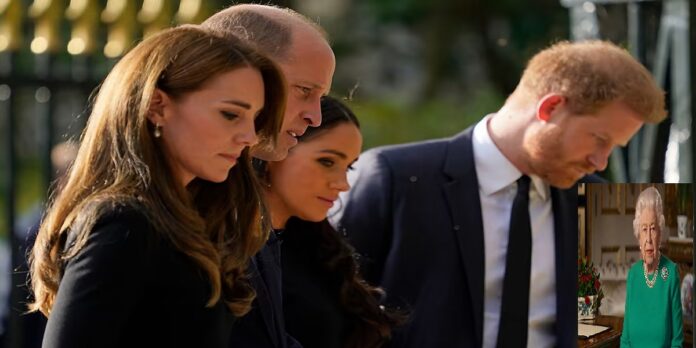 Queen Elizabeth II, who died at the age of 96 on Sept. 8, was well-known for her bright fashion choices.

So it is fitting that her granddaughters-in-law, Kate, the Princess of Wales, and Meghan, the Duchess of Sussex, chose fashion choices to honor the late monarch.

Kate, the wife of Prince William, and Meghan, the wife of Prince Harry, took part Wednesday in the royal family’s procession escorting the queen’s coffin from Buckingham Palace to Westminster Hall, where it will lie in state until her Sept. 19 funeral.

The sisters-in-law both wore black to the somber event and paired their ensembles with sentimental nods to the queen.

Kate wore on her left lapel a brooch that belonged to the queen. Known as the Diamond and Pearl Leaf Brooch, it features three pearls set on a diamond leaf. Both Kate and the late queen have been photographed wearing the brooch previously.

Meghan paid tribute to the queen with her earrings, a pearl and diamond pair that were gifted to her by the queen.

The queen gave Meghan the earrings in June 2018, shortly after her wedding to Harry, on the occasion of Meghan’s first solo engagement with her. Meghan and the queen traveled from London to Cheshire in the royal train for a day of engagements, throughout which they were seen sharing laughs.

Both Meghan and Kate have appeared to enjoy a warm relationship with Elizabeth over the years.

Harry and Meghan named their daughter Lilibet “Lili” Diana Mountbatten-Windsor after the queen, whose family nickname was Lilibet. Her middle name, Diana, is a tribute to Harry’s mother, the late Princess Diana.

Meghan told Oprah Winfrey in a 2021 interview that the queen was one of the first family members she met in her relationship with Harry.

“I just really loved being in her company,” said Meghan, adding the queen “has always been wonderful to me.”

Kate was by the queen’s side at many engagements and stood in for the queen at times in recent years as she reduced her workload.

During one memorable engagement together in 2019, the queen and Kate shared a blanket while traveling by car.

In a statement after the queen’s death, William reflected on what she meant to their family, including their children, Princes George and Louis and Princess Charlotte.

“And while I will grieve her loss, I also feel incredibly grateful. I have had the benefit of The Queen’s wisdom and reassurance into my fifth decade,” William said. “My wife has had twenty years of her guidance and support. My three children have got to spend holidays with her and create memories that will last their whole lives.”

NBA & NFL admin - January 10, 2023 13901
In just four years, Patrick Mahomes has rapidly elevated into one of the top quarterbacks in the league. To compete at his level is...