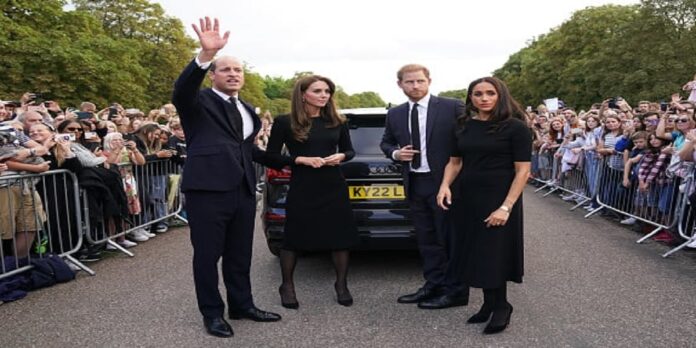 “Nothing has really changed,” a family friend of the royals tells The Daily Beast in response to an inquiry about the state of relations between Prince Harry and his wider family.

Royalist is The Daily Beast’s newsletter for all things royal and Royal Family. Subscribe here to get it in your inbox every Sunday.

That Queen Elizabeth’s funeral was so intricately planned for decades in advance that it would run like clockwork has long been a cliché of British Establishment life.

Operation London Bridge, as the overarching plan has always been known, began to be sketched out from the first days of her reign in the 1950s.

Yet on Thursday evening, less than four days before the most important state occasion seen in Britain in living memory, with the greatest assemblage of foreign heads of state the world has ever known due to take place on British soil, the plans descended into a fancy dress farce as it appeared that Prince Harry had prevailed in an acrimonious row about whether or not he should be allowed to wear his military uniform during at least some of the ceremonies.

The Daily Mirror’s respected royal correspondent Russell Myers reported that Harry will now be allowed to wear his regimental Blues and Royals uniform to a special vigil for the queen on Saturday.

Myers’ quoted “a royal source” as saying: “Common sense has prevailed. It was a ludicrous situation given the Duke of Sussex has served his country and is a highly respected member of the armed forces with everything he has done for veterans.”

It will be interesting to see how Harry plays this victory over the establishment. But one suspects that it is somewhat Pyrrhic and will do little to assuage his irritation and anger at what he sees as the institutionalized cruelty of the palace that, as recently as Wednesday, essentially sought to belittle him and advertise his outcast status by not allowing him to wear a military uniform or offer a royal salute to the queen while processing behind her coffin in London.

For their part, the royals remain nervous about the contents of Harry’s memoir, whether decorum means its publication has been delayed or not. The family feud is on, no matter how many carefully choreographed royal appearances raise hopes of a reconciliation between Harry and Prince William.

“Nothing has really changed,” a family friend of the royals tells The Daily Beast in response to an inquiry about the true state of relations between Prince Harry on one side and his brother and the rest of his family of origin on the other. “The expectation is that once the mourning period is up, Harry and Meghan will go back to California, he will publish his book, and the family here will be left to pick up the pieces.”

Another source told The Daily Beast that there was still “intense” concern among the royal family about Harry’s book containing highly damaging revelations about his father. The source added that while the palace believes it can brush off attacks from Meghan, who is largely discredited in U.K. media that have pounced on a string of inaccuracies in her various interviews—many of her supporters put this media animus down to racism—an attack by his son on King Charles would have a completely different level of credibility. It would be the ultimate insider takedown.

The palace has, previously, tried to portray Harry’s ban from wearing uniform as a practical, legal matter.

For those not up to date on the arcana of British dress codes, legally in the U.K. only active serving members of the army are allowed to wear uniform. When Harry left the royal family, he was forced to resign his honorary military roles. It is those roles that technically grant membership of the armed services to other royals. Edward, for example, may have flunked out on training after four months for a career in the theater, but is commodore-in-chief of the Royal Fleet Auxiliary.

There was general amazement when it turned out that Prince Andrew, he of the sex-case settlement, would be allowed to wear his uniform (vice-admiral, in case you are wondering) to a vigil for the queen on Saturday. The palace said this was as a “special mark of respect to the queen.”

Questions as to why Harry would not be allowed to pay a similar mark of respect, especially as he hadn’t paid millions of dollars to a woman accusing him of raping her, naturally occurred—not least, one assumes, to Harry himself, who was forced to issue a statement which said, rather testily: “Prince Harry will wear a morning suit throughout events honoring his grandmother. His decade of military service is not determined by the uniform he wears and we respectfully ask that focus remain on the life and legacy of Her Majesty Queen Elizabeth II.”

Now, however, after public disbelief (and, quite possibly private lobbying by Harry and his supporters) comes that most un-kingly of things—a political U-turn. It turns out that is in the gift of the monarch to change the rules about army uniforms and who may wear them. As the head of the army, not to mention the state, this is not a huge surprise.

First came the filmed pen-based temper tantrums, then the firing of 100 staff while the queen’s body was hardly cold; now, the chaotic unspooling of the funerary dress code represents yet another significant blow to King Charles’ attempts to portray himself as a safe pair of hands.

There is, of course, a possibility that Harry will have to delay the publication of his book, not least to acknowledge the death of the queen, but no-one is expecting it to be canceled on the basis of King Charles remarking: “I want also to express my love for Harry and Meghan as they continue to build their lives overseas”—or this chaotic U-turn to allow him to wear uniform.

The feud won’t be so easily undone.

The royals are no doubt delighted that news feeds have been swamped with reconciliation stories. But step back a pace and ask what has really happened? Well, one admittedly uncharitable way of looking at it is that Harry and William have managed to breathe the same air on two very carefully curated occasions.

“You could have cut the atmosphere with a knife, but, luckily, neither brother was armed.”

But the temperature at Windsor on Saturday when the two brothers appeared with their wives for an impromptu walkabout was well below zero. They couldn’t even bring each other to look each other in the eyes, let alone put a fraternal arm around one another’s shoulder.

You could have cut the atmosphere with a knife, but luckily neither brother was armed.

The alacrity with which William laid claim to the title of peacemaker in the wake of the appearance is likely to have annoyed Harry. Sources in William’s camp were telling reporters that the joint appearance was William’s initiative even as the engagement was happening.

On Wednesday, as the two brothers processed behind the queen’s coffin, they were side by side but a world apart.

Harry performed his duty admirably. He showed no emotion, other than sadness at the queen’s death when he dabbed at his eyes while standing behind William in Westminster Hall.

If the story about Harry’s uniform U-turn is confirmed, and the palace has not responded to The Daily Beast’s request for comment, huge pressure will build for Harry to be allowed to wear his uniform to the funeral as well.

The trouble that the palace faces now, if it tries to maintain the ban on Harry wearing uniform to the funeral on Monday, is obvious. Charles’ own actions will have given the lie to the argument that it is, sadly, not constitutionally possible.

The tantalizing possibility of Harry wearing uniform to the funeral itself would be a huge victory for him—and an utter humiliation for his father, the new king, entirely of his own making..

NBA & NFL admin - January 10, 2023 13898
In just four years, Patrick Mahomes has rapidly elevated into one of the top quarterbacks in the league. To compete at his level is...