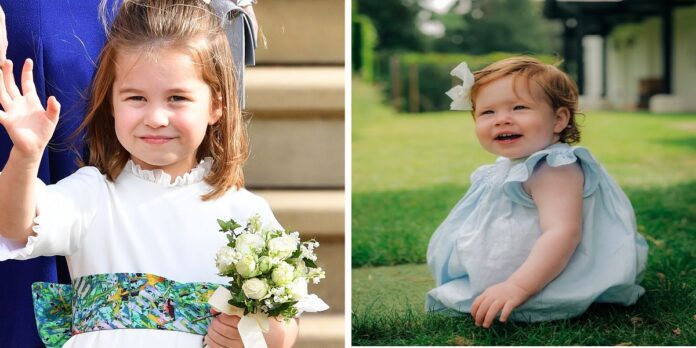 Prince Harry and Meghan Markle announced the birth of their daughter, Lilibet “Lili” Diana Mountbatten-Windsor, on June 4, 2021, and so much has been made about the baby’s name. Her middle name is after Harry’s late mother of course and her first name is after Queen Elizabeth II as “Lilibet” is the nickname those close to the monarch have called her since she was a child. But while everyone is pointing to those connections, there’s something major Lili has in common with her cousin Princess Charlotte that not many people have realized. Read on to find out what that is, as well as the made-up connection Prince George has with Meghan and Harry’s son, Archie.

Well, the Duke and Duchess of Sussex’s status doesn’t affect their children’s places in the line since Prince Harry is a prince by birthright and the son of the future king. Therefore, Lilibet falls in line behind her father and big brother, Archie Harrison. Prince Harry is sixth in the succession order, just after his older brother Prince William and the Duke of Cambridge’s three children: Prince George, Princess Charlotte, and Prince Louis. Archie is seventh and Lilibet now has the eighth spot. Lili is Queen Elizabeth’s first great-grandchild born since Prince Philip‘s death in April 2021. However, she isn’t the first royal baby born in America. Lord Frederick Windsor, the son of the queen’s first cousin, welcomed their eldest daughter, Maud, at the Ronald Reagan UCLA Medical Center in Los Angeles in 2013. Maud is 52nd in the line of succession.

The connection Charlotte and Lilibet Diana share, besides being the only granddaughters to the future king, is in their names. Prince William and Kate Middleton’s daughter is also named after both her great-grandmother and late grandmother as her full name is Princess Charlotte Elizabeth Diana.

As for Charlotte’s first name, that is the feminine version of her grandfather Prince Charles’ name. The Cambridges’ daughter also shares a name with Kate’s sister, Pippa, whose middle name is Charlotte.

Prince George made up a connection with Archie’s name

Charlotte’s big brother also has a connection to Lili’s big brother through a name, albeit Prince George made it up himself. A few months before Archie’s birth on May 6, 2019, The Sun reported that George had been telling people his name was “Archie.”

“To my astonishment, he said, ‘I’m called Archie,’ with a big smile on his face,” one woman recalled when Prince George actually approached her because he wanted to pet her dog. “I don’t know why he calls himself Archie, but kids often play with their names, and I think it’s lovely.”

It’s not known if George knew what his aunt and uncle had planned to name their son before the birth or if the little prince just liked the name Archie and decided to use it. However, there is a legit name connection between Will and Kate’s youngest son and Archie. The third Cambridge child’s full name is Prince Louis Arthur Charles, and Archie is a nickname used for Arthur.