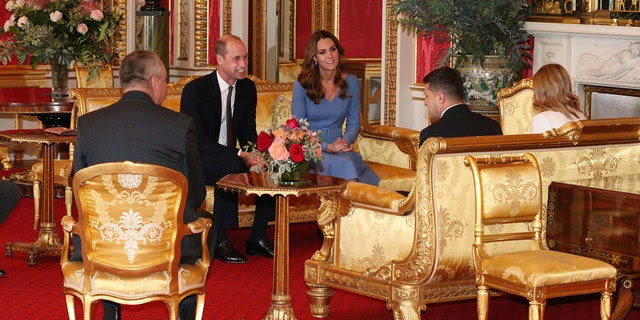 Prince William and Kate Middleton have spoken out in support of Ukraine and its President Volodymyr Zelenskyy.

The Duke and Duchess of Cambridge backed Ukraine and its leader amid attacks from Russia in a message via Twitter on Saturday.

“In October 2020 we had the privilege to meet President Zelenskyy and the First Lady to learn of their hope and optimism for Ukraine’s future. Today we stand with the President and all of Ukraine’s people as they bravely fight for that future,” the tweet reads

The supportive message from the British royals came just hours after Zelenskyy posted a video to social media showing himself walking around the streets of Kyiv after a night of artillery fire in different parts of the city, telling the nation “I’m here.”

Zelenskyy said in a short video address to Ukrainians, “We will defend our country,” and said that there’s a lot of false information online.

“There’s a lot of fake information online that I call on our army to lay down arms, and that there’s evacuation,” Zelenskyy said. “I’m here. We won’t lay down our arms. We will defend our country.”

Despite Russian forces moving closer to the center of Kyiv, Zelenskyy declined an offer from the United States to be evacuated from the city.

“The fight is here; I need ammunition, not a ride,” Zelenskyy said, according to the Associated Press, who spoke with a senior intelligence official.

William and Kate first met Zelenskyy and first lady Olena Zelenska in 2020 during the Ukranian president’s two-day official visit to the United Kingdom. Photos show both couples speaking at Buckingham Palace in central London on Oct. 7, 2020 Street fighting broke out in Ukraine’s capital city of Kyiv overnight Friday as Russian troops closed in.

The battle for Kyiv comes after two days of fighting in the country after Russian troops invaded earlier this week that has caused hundreds of deaths and destruction in the country.