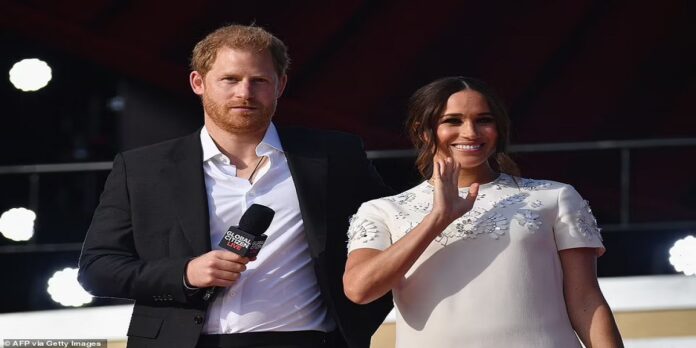 Prince Harry and Meghan Markle raised eyebrows today after intervening in the Ukraine crisis with a statement condemning Vladimir Putin’s invasion, amid jokes that the Russian president would be ‘shaking in his boots’.

But the couple, who live in an £11million mansion in Montecito, California, some 6,000 miles away from Kyiv, were criticised for a ‘breathtakingly arrogant’ statement and accused of ‘once again making this about them’.

Their statement issued at 10pm UK time last night came after Russia launched a full-scale invasion early yesterday morning, thought to be Moscow’s most aggressive action since the Soviet invasion of Afghanistan in 1979.

By the end of the day, the Ukrainian government said 137 civilians and military personnel had been killed. Several explosions were heard in the capital of Kyiv early this morning as Russian forces pressed on with their assault.

Today, Twitter was abuzz with reaction after Harry and Meghan issued their statement – which was headed ‘We Stand With The People Of Ukraine’ – as some social media users posted memes poking fun at the couple.