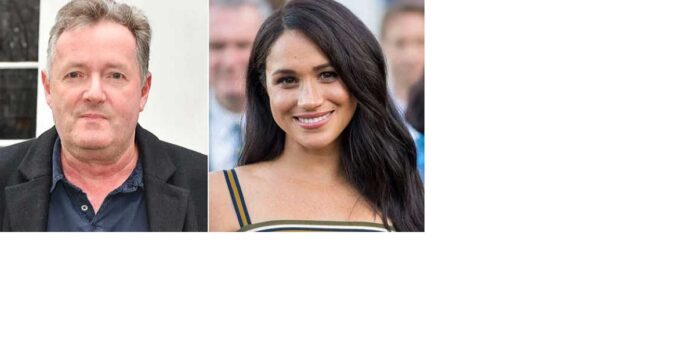 British TV presenter Piers Morgan does not seem to end feud with Prince Harry’s wife Meghan Markle as he once again took aim at her, asking the Duchess of Sussex to be his first guest on new show as the two ‘have some unfinished business’.

The outspoken host left his job by walking out of the set of Good Morning Britain after he branded Meghan an “absolute disgrace” and said he didn’t believe a word she said in her interview. Morgan’s comments on the show generated more than 40,000 complaints.

Morgan recently told Sky News Australia: “Fundamentally, what I want the show to do is be a platform for free speech and debate. And the right for people to come on and have their own opinion without being shamed and cancelled – because that’s the way back for society.”

He went on: “If Meghan Markle’s watching – I’m sure she is – if you want to be my first guest, we have a bit of unfinished business. I’m available.”

Now fans have begun to speculate about Morgan’s offer to Meghan as some are saying Meghan won’t respond to the TV presenter’s challenge. While, a large number of fans think it’s a good publicity strategy for his show as he knows Meghan can’t visit to the UK owning security fear and she’s keeping herself away from media attention these days.

The former ‘Good Morning Britain’ presenter, who misses no opportunity to take a jibe at Prince Harry’s sweetheart, has sparked new debate on social media.

The way Meghan Markle paid her final respect to Queen Elizabeth has Everyone saying...

NEWS admin - September 30, 2022 0
After the Duke and Duchess of Sussex stepped down as working members of the royal family, they made it abundantly clear that they bore...

Uncategorized admin - September 27, 2022 3
During a visit home following their move to the USA,Prince Harry and Meghan Markle may have stepped back from their royal duties in February...

Camilla “Spat Out Tea” When Prince Harry Suggested a…..

Uncategorized admin - September 27, 2022 0
Meghan Markle and Prince Harry push back on return to work to spend time with kids after lengthy separation. The Duke and Duchess of Sussex...

Prince Harry Finally Open Up On The Real Reason He Cried During Queen...

Uncategorized admin - September 18, 2022 6
It's an emotional day for the royal family. Queen Elizabeth II's coffin was taken from Buckingham Palace on Wednesday and a procession including King...

NEWS admin - September 18, 2022 8026
How Meghan, the witch of Windsor, killed the Queen, By Azu Ishiekwene Meghan hate is not a deep-rooted British sentiment reserved...

Prince Harry and Meghan Markle will have ‘no role to play’ now Charles is...

Uncategorized admin - September 18, 2022 3
Prince Harry and Meghan Markle have been residing in the UK while the Royal Family grieves the death of Queen Elizabeth II. In recent weeks,...

Prince William & Prince Harry: Why return to Balmoral was so painful for royal...