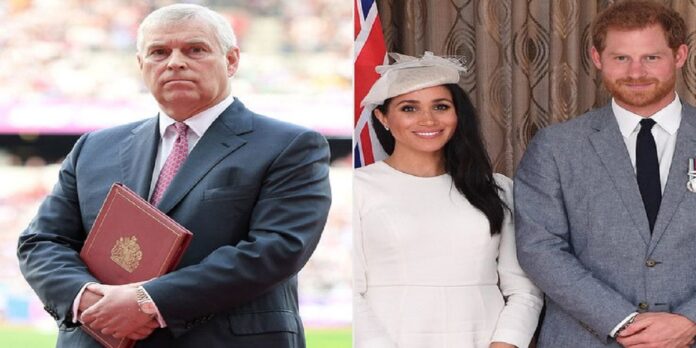 It took Buckingham Palace two years to oust the Duke of York the same way it did the Duke and Duchess of Sussex.Royal watcher Amanda Matta — who makes educational videos about the royals on TikTok and has more than 612,000 followers — thinks the timing is telling.Prince Harry and Meghan Markle announced their step back from royal duties in January 2020, citing financial independence as the reason. They stopped using their HRH titles later that year, and their royal patronages and military titles were removed in January 2021.

Prince Andrew stepped back from royal life in November 2019 after his BBC “Newsnight” interview, where the prince was questioned over his alleged involvement in Jeffrey Epstein’s sex-trafficking scheme.Although Andrew left royal duties before the Sussexes, his royal privileges were removed one year after Harry and Markle’s.Andrew’s royal patronages and military titles were removed in January after he was faced with a sexual-assault lawsuit from Virginia Giuffre, who alleged that Epstein forced her to have sex with the prince when she was 17. A royal source told Insider at the time that the prince would also no longer use his HRH title.

Andrew has long denied the allegations, having previously said he never met Giuffre.They reached an out-of-court settlement for an undisclosed sum on February 15. The amount was to be donated to Giuffre’s nonprofit advocating for victims of trafficking. Andrew did not admit to any of the accusations against him.Amanda Matta says Andrew losing his titles after Harry and Markle sends a ‘clear message’

“The royal family will only be proactive in doling out consequences for those it sees as seriously undermining their image,” Matta told Insider.Matta said that while it took the palace more than two years to take Andrew’s alleged transgressions seriously, “their retribution against a prince who married an outspoken Black American woman was swift and exhaustive.”

“They didn’t take the allegations about Andrew as seriously as they took Harry and Meghan’s departure… until it became clear that Andrew’s behavior wasn’t able to be swept under the rug,” Matta said.During a charity event in January 2020, Harry said that his initial hope was to “continue serving the Queen” and his military associations, but was told this wouldn’t be possible without public funding.

In an interview with Oprah Winfrey in March last year, the couple said that the racism Markle faced by the British tabloids played a “large part” in their decision to leave royal duties and move to the US.The Sussexes also said they faced racism within the royal family, telling Winfrey that an unidentified member expressed concerns over how dark their son Archie’s skin would be. Winfrey later said that although Harry wouldn’t confirm which royal made the comments, he told her it wasn’t the Queen or Prince Philip.

In a statement addressing the couple’s exit in January 2020, the Queen said she recognized “the challenges they have experienced as a result of intense scrutiny.””I want to thank them for all their dedicated work across this country, the Commonwealth and beyond, and am particularly proud of how Meghan has so quickly become one of the family,” the Queen said in the statement.

Royal commentator Kinsey Schofield told Insider that the nature of both Andrew’s and the Sussexes’ exits can be explained by individual circumstances.”Prince Andrew is the Queen’s son and has stressed to the Queen along with the rest of the family that he is not guilty of what he is being accused of — which is why his exit has not been so abrupt,” Schofield, founder of the royal blog To Di For Daily, told Insider.

“Harry and Meghan chose to leave, and they chose to leave when they did and how they did,” Schofield added.Buckingham Palace and representatives for the Duke and Duchess of Sussex declined to comment when contacted by Insider.