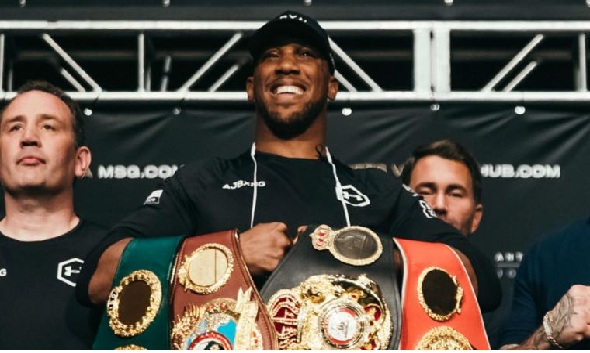 Anthony Joshua makes his 2019 debut Saturday night when he puts his IBF, WBA (super) and WBO heavyweight titles on the line against Andy Ruiz Jr. at Madison Square Garden, live and only on DAZN.

Before the unified heavyweight champion steps through the ropes one more time, Sporting News takes a look at some things you may not know about the British star. Coming to America
Out of his 22 fights, Joshua had never competed outside of the United Kingdom. His thought process behind staying at home was due to the fact he held three of the four major heavyweight titles and routinely sold out 80,000-90,000 seat stadiums.

Why make the journey into the United States when everything is right there in front of him?

Joshua’s mind changed when he attended the Canelo Alvarez-Rocky Fielding fight in December and did commentary with the DAZN broadcast team. Being inside MSG and the atmosphere of the battle convinced Joshua to embark on a new journey to become a global star, he said.

Joshua’s Nigerian roots
For part of his childhood, Joshua lived in Africa with his parents. His mother is Nigerian, and his father is Nigerian and Irish. While living in Nigeria, Joshua went to a boarding school until he was in the seventh grade. When his parents got divorced, and he moved to England with his mother, Yeta, at age 12.

Decisions, decisions (there’s only one)
Joshua steamrolled through his first 20 career fights when he met Joseph Parker in a heavyweight title unification bout in March 2018. He’d won every contest by stoppage with only one going into the 11th round when he knocked out Wladimir Klitschko in their epic affair in April 2017. But on this day, Parker made history, becoming the first man to take Joshua the distance. It wasn’t enough, though, as Joshua won a lopsided decision on all three scorecards to add the WBO belt to his IBF and WBA (super) belts.

A game of chess
The board game is one that tests the brain. It’s all about strategy and forces you think ahead and not just what’s in front of you. A couple years ago, Joshua was introduced to chess by former undisputed heavyweight champion and fellow Englishman Lennox Lewis.

“Chess, it’s the same type of thing in the ring, like taking one of your opponent’s pieces and then counter-attacking,” Joshua told Stubhub.co.UK in 2018. “You need to be two moves ahead all the time.”

Olympic gold medalist
Joshua didn’t start boxing until 2007 when he was 18. He won the 2009 and 2010 Haringey Box Cup along with the senior ABA Championships in 2010 in only his 18th amateur career. Joshua was a prospect on the rise with considerable upside.

Seeing that he could be a future heavyweight champion and the heir apparent to Lewis, many promoters came left and right to try and secure Joshua. He was even offered by one promoter £50,000 ($63,131.50 in U.S. dollars) to turn pro.

Instead, Joshua turned it down to focus on continuing to improve and earn a spot on the 2012 Olympic team. Not only did Joshua make the team representing Great Britain, but won a gold medal as a super heavyweight.

Joshua’s time in prison
People look at Joshua and think he was born with a silver spoon in his mouth, living a prim and proper life. However, that wasn’t the case. In 2009, Joshua spent two weeks on remand in Reading Prison for what he would only say was for “fighting and other crazy stuff.” Joshua faced 10 years in prison. He ended up not spending more time in jail and was sentenced to a year of house arrest instead. Joshua has said the experience was a wake-up call, and he has credited boxing for keeping him on the right path since.

Joshua lived with mom after career-defining victory
One would have expected Joshua to buy a mansion after knocking out Klitschko and becoming the king of heavyweight boxing. Joshua made over $18 million for the Klitschko affair and had the means to live wherever he wanted. So what did Joshua do after the fight? Instead of blowing through his money, he lived with his mother and reconnected with her for several months.

Tattoos
These days, having ink on your body seems like the thing to do if you’re an athlete. The 29-year-old Joshua is no different as he has three of them on his chiseled frame. He has one with the word “wisdom” on his right arm. The second one is with a map of Africa with Nigeria highlighted because of his parent’s heritage. The final one is of a British lion on the back of his neck.

He once defeated an Olympic runner in a race
Coming off his gold medal at the 2012 Summer Olympics, Joshua was starting to make his mark as a professional. He took part in a television show titled “Superstars” in March 2016, one month before his IBF title bout with Charles Martin. The TV special had different athletes competing in a wide range of events. One of those was running the 100 meters.

Joshua blistered the field and won the race which included two-time Olympic gold medalist in the 5,000 and 10,000 meters Mo Farah by running an impressive 11.53 seconds.

Brick by brick
It isn’t always glitz and glamour for athletes who become megastars. Conor McGregor was a plumber, living paycheck to paycheck and before his UFC debut in April 2013, he went to pick up a welfare check.

While it never got to that point for Joshua, he still had to take jobs before succeeding in the sweet science. So before he put on the gloves full time, Joshua worked at a series of construction sites during his amateur career, where he was a bricklayer. Joshua said if boxing didn’t work out, he would lay bricks for a living.